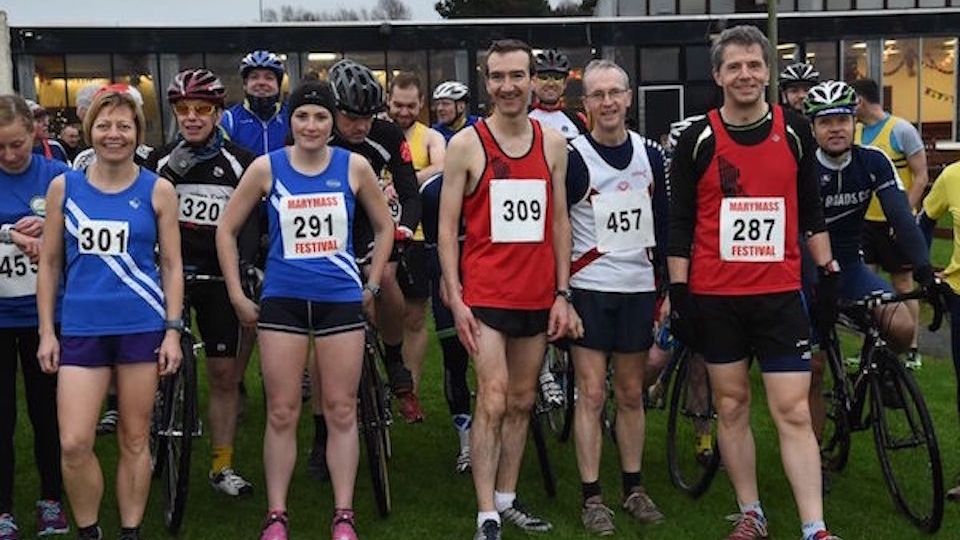 The decades-long (friendly) rivalry between Ayrshire’s runners and cyclists is set to be reactivated in a few weeks’ time, as the annual event to decide who is quicker returns to the race diary on Sunday, 19 December.

Before the pandemic, ‘The Cyclists vs The Harriers’ race, created by the Irvine YMCA Harriers and the Fullarton Wheelers CC, had been held every Sunday before Christmas since 1959.

As in past years, the 62nd running of the event will pit cyclists against runners on a five-mile course on soft ground, starting and finishing at Irvine Sports Club. The route itself, which follows paths around the club and the town as well as a cross-country section over Irvine Moor, will be strewn with obstacles, to make the challenge as fair as possible.

Limited to 100 runners with some entries still remaining, this year’s event is being presented as a ‘slimmed down’ version of the competition. Sacrificed to Covid restrictions is the table full of Christmas presents – brought by the competitors themselves – from which runners traditionally picked their prizes.

In terms of settling the question of whether two legs or two wheels are faster, things haven’t really been going our way. Since 2015, two wheels have triumphed, with cyclists taking home the trophy three times.

The last win by a runner was 2015, when Del Young (Garscube Harriers) came home in a time of 27.52 – more than 30 seconds ahead of the cyclist who took second.