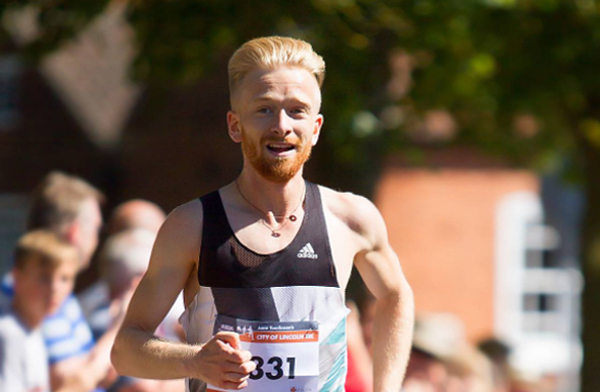 Wilkinson Steals A Win At Lincoln

Joe Wilkinson defended his title at the Run For All City of Lincoln 10K (Sunday 1 July) but only two seconds separated him from the runner up on a very hot day where the water stations and sponges were popular.

It was a good day at the office for Joe and his Lincoln Wellington AC teammates who took the top four places and the women’s title at this popular road race. Organised by Jane Tomlinson’s Run For All, LIncoln 10K is part of their 10K series and known for a fast, flat course within a historic setting that includes the Roman Walls and Lincoln Cathedral.

Wilkinson crossed the finish line in 30:39 narrowly beating Lucian Allison who had to settle for second place in 30:41. William Strangeway was third in 31:40 and Ryan Page fourth in 31:48.

There was a close finish in the wheelchair race with Mark Conway winning in 24:03, four seconds ahead of Bret Crossley who was second in 24:07.

The 22nd City of Lincoln 10K had been rescheduled from March due to ‘The Beast from the East’; however, it faced another type of extreme weather as temperatures reached 26 degrees although an extra water station, sponge/spray station and hose pipes helped to keep everyone cool.

Many people were running for charity including Louise Mackenzie AKA ‘Bananawoman’ who took part on behalf of Leap, an organisation which provides conflict management training to young people., and one of several worthy causes that benefitted from runner's fundraising efforts.