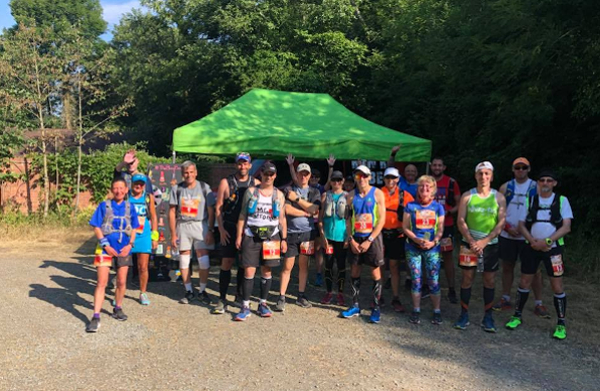 While Americans were celebrating their national holiday, a small band of runners in Shropshire paid their own tribute to Independence Day. Life, liberty and the pursuit of bling...

Independence Day 2018 was a new, midweek offering from How Hard Can It Be Events & CODRC and started at 10am from Coalport Village Hall. There was a choice of a half marathon or marathon, all of which took place on a mixture of tracks and paths and included part of the Silkin Way, Rough Park and the Valley of Ironbridge in Telford.

The continuing heatwave was a factor as runners completed laps along the route before finishing back at the village hall where they were presented with their very own wearable hubcap. The expression ‘wheels in motion’ springs to mind. Every runner received a unique USA themed medal to commemorate the day; and along with the July the Turd medal from the day before, are eye-catching additions to the organiser’s gallery.

The next How Hard Can It Be event is the Piece of Cake Trail Race on the 14 July, now with a revised start time of 9am (instead of 10am) due to the hot weather.