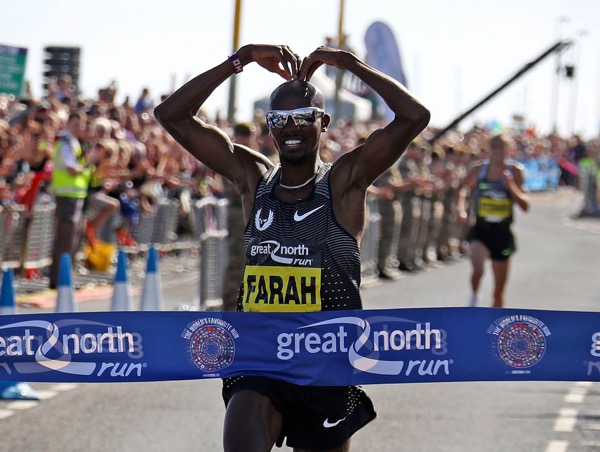 Who can challenge Mo’s GNR supremacy?

Sir Mo Farah laid down the gauntlet earlier this summer by signaling his intentions of competing at the Great North Run and laying claim to what would be an unprecedented sixth consecutive title at the Tyneside event.

Just as he did in 2018, the Great North Run will be central to Farah’s preparations for Chicago Marathon, which is staged one month later (Sunday 13 October). As Sunday’s race approaches, Farah’s dominance isn’t necessarily under direct threat yet a straightforward victory is most definitely not assured.

Looking most likely to be in contention is Scottish runner Callum Hawkins, who, since being the second Britain behind Farah at the GNR in 2015, has developed into a superb distance runner. This year, Hawkins has posted his fastest marathon time to date, grabbing 10th at London in 2:08:14.

Ethiopian Tamarit Tola will be aiming to upset the British contingent’s hopes on Sunday and on paper looks the most likely to do so. The 28-year-old boasts a half marathon PB of 59:37 (Farah’s stands at 59:22) and secured a bronze at the 2016 Olympics over 10,000m.

In the women’s competition, Mary Keitany will bid to win her fourth Great North Run since 2014 when she lines up on Sunday. The Kenyan has secured first in 2014, 2015 and 2017 and once again stands as favourite to repeat her victory.

British interest looks likely to lie with Steph Twell, who is on fine form after setting a PB (75:57) at the Mattoni Olomouc Half Marathon in June this year, plus her strongest showing over 10k (31:55) at Chichester. Charlotte Purdue will also be looking to build upon what has been an impressive 2019, with the Aldershot runner taking 10th at the London Marathon in a PB time of 2:25:38.

Despite our predictions, the Great North doesn’t always go to form and there will no doubt be many surprises in store at Sunday’s race. It seems as if the sell-out, 57,000 strong field can look forward to some ideal running conditions – dry, light breeze and not too warm – and the runABC North team will be looking forward to recounting all of the action in our race report early on Monday.