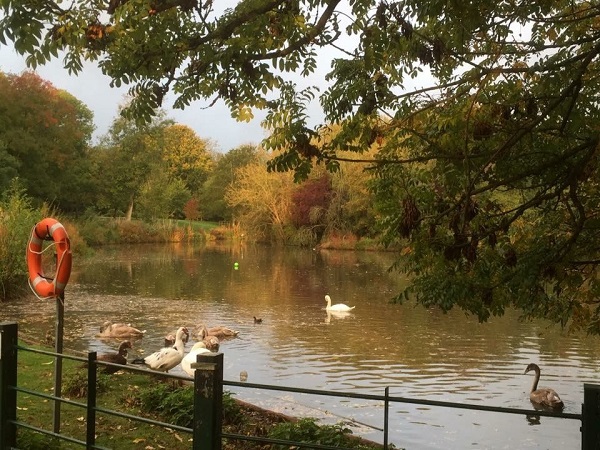 Perhaps it's the holiday period having an effect but the runABC South race listing for this weekend seems to be rather light on events, with barely a dozen races recorded. However, there are still some hidden gems among them, including a cracking trail 10K at Eastbourne on Saturday (19 August) and a pancake flat half marathon at Clacton-on-Sea on Sunday.

Decoy Dash 10K on Saturday is based at Eastbourne Rovers AC's home at Eastbourne Sports Park. Decoy Dash is promoted by Sussex-based race organisers We Run They Run I Run and the race draws its name from the two-lap circuit round Hampden Park with its feature Decoy Pond (see photo above). After an exhilarating lap of the running track the course includes open parkland, playing fields and lakeside section before the final sprint for glory back on the track.

Also on Saturday and not far away at Clayton, West Sussex is 13 The Hard Way – described as: 'a no frills, hilly half marathon', starting at Underhill Lane, Clayton. The race commences with a lung-bursting climb up to the South Downs Way to Housedean and back to Clayton. After all that effort it will be music to the ears to hear that Bedlam Brewery will be present with some of their special fluids to aid runners' recovery.

On Sunday there are two contrasting half marathons to tempt us. The busy Ryde Harriers, who have been running since 1886, promote a dozen events each year and one of their best is the Isle of Wight Half Marathon. There were 350 finishers last year in just over three hours and the course is described as challenging. Starting and finishing in Appley Park, Ryde the route follows roads, gravel tracks and bridlepaths in beautiful countryside to St. Helens and back.

Finally, there is a traditional flat, fast course available at the Clacton Half Marathon and 10K, held as part of Clacton Carnival. Both races make full use of Clacton's broad and pancake flat promenade, with the half marathon being two laps of the 10K course. There is also the Clacton Carnival Golden Mile Fun Run for runners of all ages to enjoy and bespoke medals and goodies for all finishers. Course record holders for the half marathon are Lewis Chalk (1:17:16) and Nikki Brockbank (1:26:46) and in the 10K the fastest times are by Paul Whittaker (32:59) and Rachel Doherty (40:49).