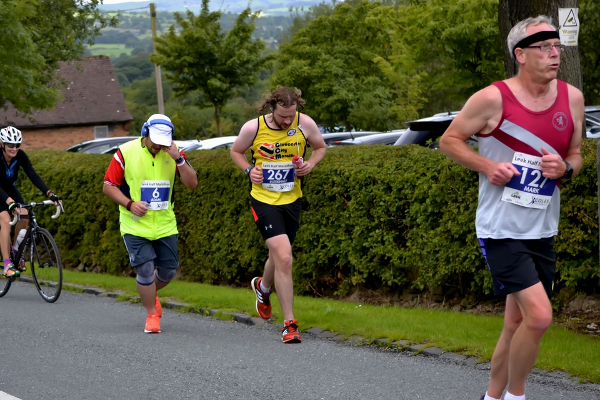 It’s time to grit the teeth and dig in as we focus on hilly races this weekend (18-19 August). Expect plenty of ups and downs in these three events this Sunday.

The ascent begins in Herefordshire at the Wye Valley 10 Mile Road Race on a rural course best described as ‘undulating’. The race starts and finishes at Hereford Rowing Club and runners follow a one lap route around apple orchards in Breinton Village. And for anyone feeling extra competitive, the race is also hosting the Hereford 10 Mile County Championships.

Another undulating race is Dill’s Dash, a 7-mile run on lanes and along canal towpaths in Claines, Worcestershire. Organised as a fundraiser for Asthma UK it is held in an attractive location and starts at 10am from County Sports Playing Fields. There are prizes for the 1st, 2nd and 3rd male and female and age categories awards with a medal, fruit and water for every finisher.

Climbing legs are definitely needed for our final race, the Leek Half Marathon organised by the same team who host the Alsager 5 and the Meerbrook 15K. Part of the NSRRA programme of races and an annual favourite with runners due to the hilly course set within the picturesque Staffordshire Moorlands.

Note: due to the ongoing fire on The Roaches the race will not be held on the usual course. However, after a meeting with the Fire Service and other parties, the organisers have devised a 10 mile route as an alternative. It has quite a few hills...

For more information about these and other events, visit our race listings page.