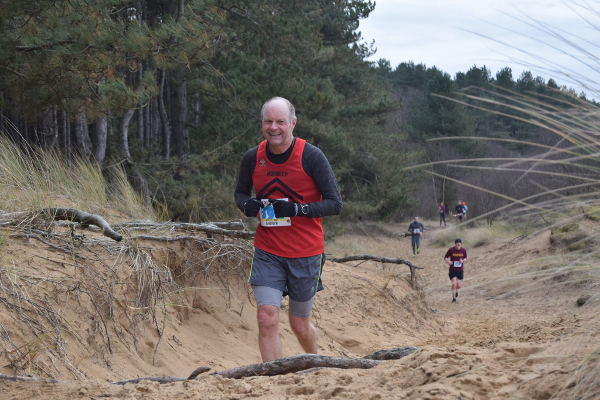 'Tough' and 'fun' were the words used to describe the course at the Tiger Beetle 10K (Sunday 15 March) as the running community came together in a show of solidarity. The sandy course was the perfect escape in these unsettling times.

It was the second outing for this trail race from Time2Run Events UK, held at Ainsdale Sands National Nature Reserve, Merseyside and was well supported by human and canine runners. There was a choice of three waves with a fourth one for canicross entrants.

Light drizzle early on cleared the way to leave blue skies and sunshine as everyone prepared for a testing run on a visually interesting course that was undulating to hilly and well-marked and signed. Forest trails, sand dunes and the beach were waiting for them and there was a friendly, ‘all in it together’ atmosphere.

Wave 1 set off at 10am followed by Wave 2 at 11.30am then Wave 3 at 13.00pm. The Canicross Wave started at 14.00pm. These start times suited the late risers as well as the early birds. Water, cake and sweets kept the fuel tanks topped up as they made their way around the Nature Reserve while being encouraged by cheery marshals.

Neil Smith of Anster Haddies RC was the winner in Wave 1 in 35:36. Grace Tobin of Liverpool Harriers was the women’s winner in 43:35.


In Wave 2, there was a strong performance from Scott Zikmanis to win in 38:37. Janine Needham of Red Rose Road Runners was the first female in 44:59.

This was an enjoyable day for everyone that brought a much-needed touch of normality.