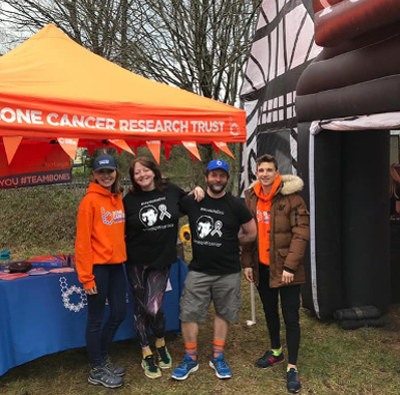 Darren Wilkinson turned a negative into a positive when he and his wife Mel hosted the St Paddy’s Day Purgatory (and a Pint!) 5K and 10K (Saturday 14 March) on behalf of the Bone Cancer Research Trust. He didn't let his diagnosis of ameloblastoma get in the way of his fundraising efforts.

This popular couple are the brains behind Sheffield-based Run For It who organise family-friendly events that include the annual festive favourite – the Santa Dash. Their events cater to people of all ages and abilities where the emphasis is on having a fun day out while helping local and national charities.

On 30 January, Darren was diagnosed with a massive tumour in his jaw called an ‘ameloblastoma’. This benign but aggressive tumour is very rare – it affects one in five million people – and requires radical surgery involving the removal of his lower jaw.

He was helped and supported by the Bone Cancer Research Trust and in gratitude, wanted to raise funds and awareness of this condition hence the St Paddy’s Day Purgatory (and a pint!) 5K and 10K near Meadowhall. A legion of runners turned out including Terry Forrest, dressed like many others in green who were doing this for #MyMateDaz. The Bone Cancer Research Trust set up a stall and also took part in the event.

Every runner received a medal and personalised T-shirt and enjoyed a drink or several in the inflatable pub at the finish along with cakes. Darren had his hair shaved off by two raffle winners to raise funds for this charity.

The day was summed up by Darren Wilkinson in poetical style: “It was a sight to be seen with everyone in green, and with fun and humour we will beat down this tumour.”