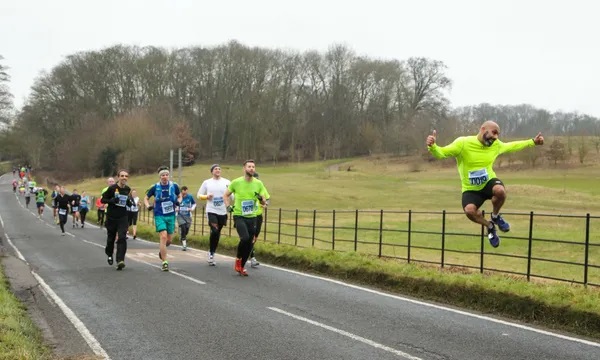 Cornish wings it in Watford

Watford Harriers' flagship Half Marathon event has held pride of place in the Hertfordshire race calendar for over 50 years. The event draws 1,500 runners and apparently gives its runners wings, if the image above is anything to go by! The latest edition of this high-flying event took place on Sunday (2 February) from Cassiobury Park.

The course is on pleasant, undulating country roads that are entirely closed to traffic. The downhill start can be deceptive as there follows six miles of climbing before several ups and downs and a final tough uphill mile to the finish. Despite the challenging nature of the route some fast times have emerged and the course records are 1:04:50 by Tomas Abyu (Salford Harriers) and 1:13:42 by Liz Yelling – both set in 2007.

This year's winged-heeled gods of the tarmac were led by Jonathan Cornish (Hercules Wimbledon, 1:07:29) and W35 Annabel Gummow (Winchester, 1:14:50 PB) as both champions enjoyed healthy margins of victory.

Gummow's win in the women's race was even more decisive as three minutes had elapsed before the arrival of W35 masters Rachel Felton (Shaftesbury Barnet Harriers, 1:18:10) and Sophie Delderfield (Vale of Aylesbury, 1:19:59 PB) to complete the rostrum.

Overall there were 1,353 finishers in 3:17:55 and half those were home and hosed in 1:52:25. The race raised funds for the Watford-based Peace Hospice Care charity.