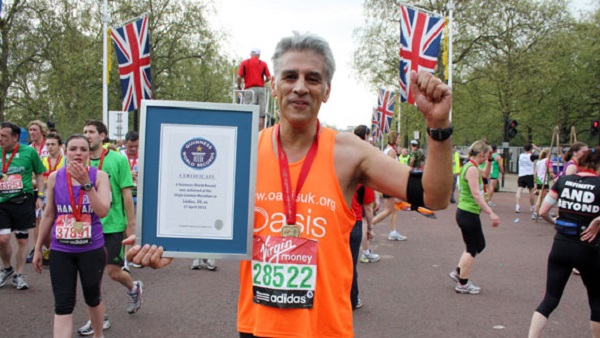 The 38th Virgin Money London Marathon (VMLM) takes place on Sunday (22 April) from Blackheath Common to The Mall. Arguably the world's greatest 26.2 mile race has already set a world record as 386,050 people applied to compete this year – the most for any marathon in history.

Events like VMLM always throw up some astounding statistics. A few to ponder are the provision of 1,263 portable toilets and the 84 pubs on the famous route. In the first race in 1981 just 5% of the finishers were female; this year more than 45% represent that gender.

The one man/one race charity record is held by The Reverend Steve Chalke, MBE, who raised £2,330,159.38 in 2011 for the Oasis Charitable Trust, one week after the callous bombings at Boston Marathon.

Perhaps the stats that matter most to the elite field are the world and course records, along with the bonus payments that go with them. However, for Sir Mo Farah the main target will be slightly more modest, with Steve Jones' 1985 British record of 2:07:13 in mind.

Sir Mo said: “I have learned a lot since I made my marathon debut in London in 2014. I understand the marathon more, so I will go after the British record and see what I’m capable of. My aim on Sunday is to respect the other guys and get on with the race.”

Merely finishing is the aim of most of the 50,000 accepted entries and this has been achieved by well over one million runners since 1981. Whatever your motivation for tackling the marathon in London all the staff at runABC wish you well and hope you enjoy your big day.

Catch the action live on BBC from 8:30am.