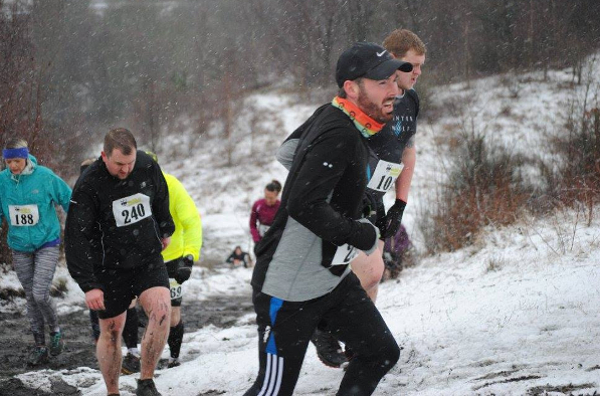 Up For A Beasting At Baggeridge

Last Sunday’s Baggeridge Winter Beast (21 January) was well named as this 10K proved to be a brute of an event. Hills, mud and snow pushed everyone to their limits but they were more than up to the task.

Over 130 runners faced down a tough course at Baggeridge Country Park, completing two 5k laps around this scenic location on the edge of the Black Country. The Country Park is at Gospel End, Sedgley and quite a few runners may have been sending up a prayer or two as they climbed Jacob’s Ladder.

They set off at 9.30am and headed towards a small bridge before the infamous steps up to the Toposcope – a flat disc engraved with points of the compass, directions and distances through 360 degrees. Waiting there was a group of young and very enthusiastic spectators who despite the conditions applauded every runner as they went past. This encouragement was appreciated by those taking part and for one runner in particular it provided a much needed boost on the second lap.

There was a ‘never say die’ attitude from the last entrant who finished the race in 123:54 despite never having run 5k before never mind a hard 10k such as this.

This was another successful event from Kickass Endurance with several runners vowing to return for another beasting.