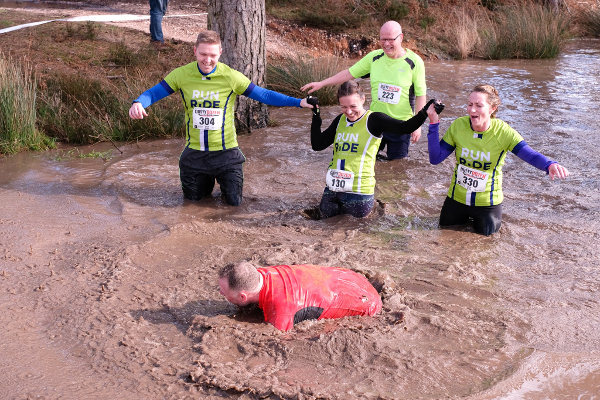 Trails of the unexpected at Dirty Dozen Run

The ‘Ditch of Doom’ was more than a few people’s nemesis as they attempted to run or swim through it at Saturday’s (29 February) Dirty Dozen Trail Run. This was part of a tough route with a few surprises and longer than the stated 12K distance.

This was the 7th year of the annual event from Mayer Active who organise a range of events including mountain bike races, sportives and trail runs. They all have one goal in mind – to explore stunning areas such as Cannock Chase via running or cycling in the company of others.

The sold out Scott Dirty Dozen Adventure Trail Run had a larger number of entries this year, all of whom were willing to test their bodies and sanity on a beautiful yet challenging course in Cannock Chase. Conditions were wet and muddy underfoot requiring proper trail shoes for this proper trail run.

Sun, rain, hail and strong winds were part of the mix as adults and children sampled the delights of rolling trails, singletrack, hard stone tracks and monster hills. The 14K fun included the ‘Ditch of Doom’.

If this wasn’t hard enough Mayer Active invited participants to show them what they could do by running two, 100 or 200 metre sections up or downhill that were timed. There were prizes for the quickest male and female on these sections.

Every adult finisher received a medal and T-shirt and there was a small prize for every child.

While this run is made for the trail purist it is, as the organisers were keen to emphasise: “An event aimed at fun rather than fast and for all abilities.”

It was good preparation for their Cannock Chase Trail Half Marathon on 4 April.