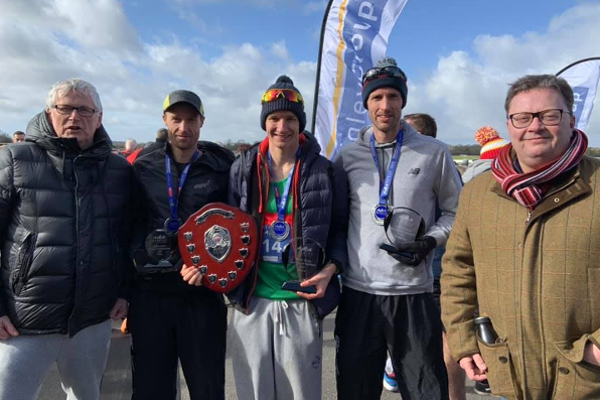 Ian Allen gallops to a win at Warwick Half

There was no stopping Ian Allen once he got the bit between his teeth on a near perfect course at Warwick Half Marathon (Sunday 1 March). He raced away to victory and a new course record. It was not quite as clear cut in the women’s race.

Allen of Spa Striders was among 1,500 runners waiting to get under starters orders at the Wigley Group Warwick Half Marathon. Organised by The Jockey Club the race, rather fittingly, started and finished at Warwick Racecourse and the Barrie Wells Trust – Box4Kids was the official charity partner.

Conditions were less than ideal on the Racecourse itself as the centre was shut for parking due to it being a quagmire! There were a few alternatives that included town centre car parks and runners were advised to factor this in on arrival.

Thankfully, the going was good for participants as they followed a gently undulating route on traffic-free roads through the Warwickshire countryside. There were a few puddles but nothing extreme and blue skies were a welcome sight after the wintry weather.

In the women’s race Joanne McCandless was first across the line; however, a faster time was recorded for Laura Peil who finished in 1:20:47 and therefore the winner. There was a decent gesture from the organisers who celebrated both their performances and will present Joanne with her own trophy. Claire Fitzpatrick of West End Runners was third in 1:25:12.

Waiting at the finish for everyone was a half pint of beer courtesy of Hook Norton Brewery.