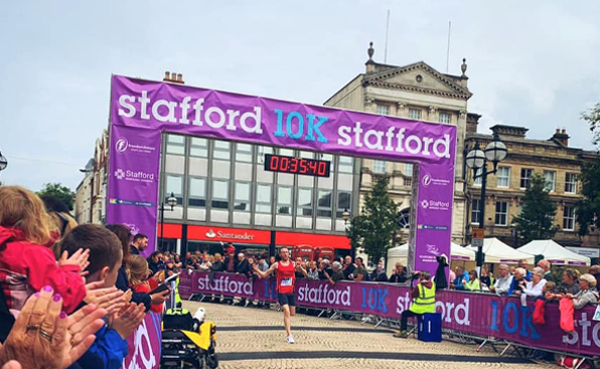 Tom Carnes gets back into gear at Stafford 10K

There was a gutsy performance from Tom Carnes who came back from a career ending injury to a PB at yesterday (Sunday 22 September) Stafford 10K and he wasn’t the only runner who was determined to succeed.

It was a different story three years ago for Tom Carnes who struggled with constant chronic back pain to the extent he couldn’t stand for more than a few minutes and was unable to walk without stopping every 200 metres to rest.

However, the sporty Up 2 Speed driving instructor wasn’t going to give up. He enlisted the help of Ben Gamble for coaching and physiotherapy which proved to be a smart move. Amazing progress culminated in an ambitious 2019 target. Together with his wife Natalie, friends and teammates at Stone Master Marathoners (Stone MM) Tom went full throttle for his goal of a triple PB at 5K, 10K and Half Marathon distances, posting a PB of 17:09 at the Mid Cheshire Summer 5K, 1:19:10 at the Lake Vyrnwy Half Marathon and now a 35:39 at the Stafford 10K. He finished 10th overall.

Also taking part was Staffordshire PC Claire Bond who suffered life changing injuries in the line of duty last year but entered the race on behalf of Care of Police Survivors (COPS). She, her husband Darren and colleague David Mullins celebrated her recovery by crossing the finish line in 1:14:55 and 1:15:01 respectively.

James Egleston of Telford Harriers won the 2019 Stafford 10K in 33:42 – one of the closest finishes to date with only a second separating him from Pravesh Patel and Lee Gratton. Georgia Chattwood of Cannock & Stafford AC/Loughborough Students AC was the women’s winner in 36:05.

Tom Carnes left his running shoes in Stafford...will he be back for them next year?