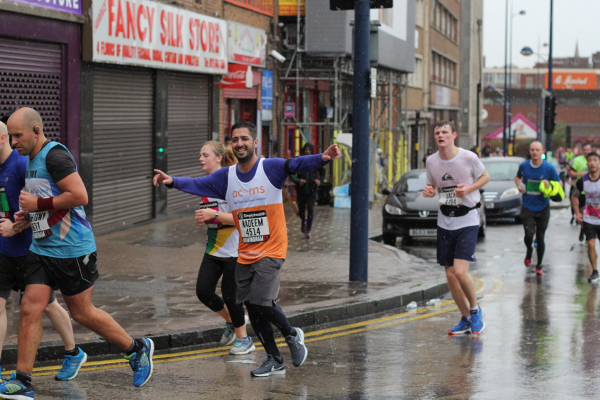 Mayor of Birmingham Andy Street was one of thousands of runners who mastered wet miserable weather to complete yesterday's Simplyhealth Great Birmingham Run.

Andy was part of a group supporting Acorns Children’s Hospice while many others were running on behalf of their own favoured good cause including a large contingent from Birmingham Children’s Hospital, a group of family and friends for mental health charity Mind and former Birmingham City player Paul Robinson, Blues Brothers Paul Tait and Paul Devlin. This trio of Paul's took part to raise funds to pay for life saving treatment for Devlin’s daughter Annie who suffers from Addison’s Disease.

These and thoundands of other brave participants headed off at 9am from Broad Street, following a new, flatter route through the centre of Birmingham. The non-stop rain failed to dampen community spirit as local residents handed out water, sweets, chocolate and snacks along the route. Marshals and volunteers on water stations also played their part ensuring runners were looked after despite the conditions.

Those hardy spectators still enjoyed a colourful procession despite the deluge with highlights including the Wolverhampton Bobsleigh team and thousands of runners in their charity vests.

Kadar Abdullahi took the big prize in the half marathon finishing in 1:06:06 ahead of teammate Omar Ahmed in 1:06:14. Ian Williams of Tipton Harriers was third in 1:09:40.

Nicola Sykes of Bournville Harriers RC won the women’s race in 1:19:57 followed by Chloe Richardson of Birchfield Harriers in 1:21:58. Alison Taylor of Nuneaton Harriers AC was third in 1:22:27.

Finally... a round of applause for marshals, volunteers, emergency services and the people of Birmingham who did their city proud.