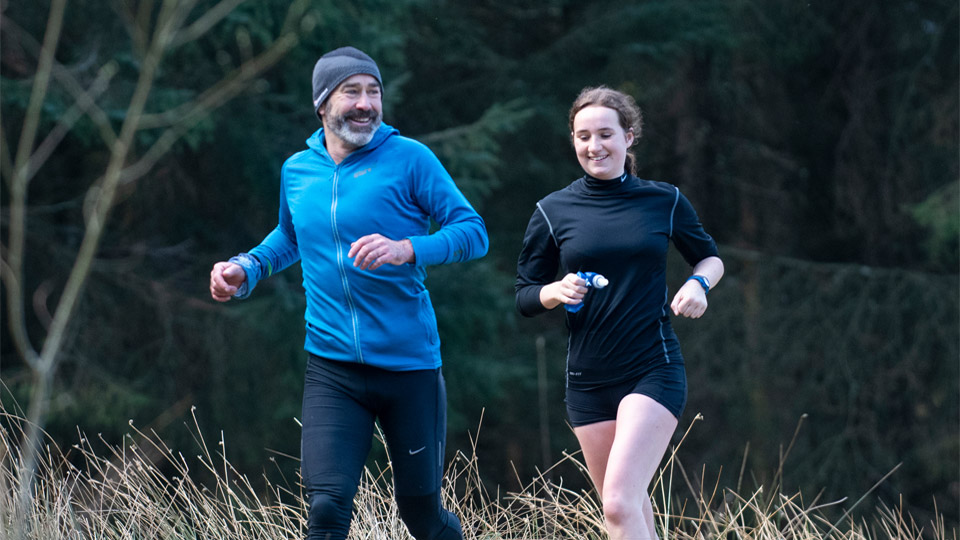 It needed the support of daughter Katie and son Luke, the juniors at Moorfoot Runners, a Bovril and popcorn pitstop and the thought of a curry to keep Ross Grieve on track last weekend. The Borders man completed the Herculean task of running 124 miles via 30+ 4-mile loops in Glentress Forest.

The 53-year-old, who underwent heart surgery just three years ago, was aiming to raise vital funds to support others with long term conditions. He's now nearing a target of £3,000 after his weekend efforts (23-25 April). And his final total will be topped up by 50% by Sir Tom Hunter and the Hunter Foundation as part of the Scotland’s Virtual Kiltwalk. Monies raised will go to the Thistle charity where Ross works.

Ross ran a four mile loop in Glentress Forest every hour on the hour, starting on Friday afternoon with only a brief recovery stop on Saturday night, when heat, dehydration and extreme salt loss took its toll. But just a few hours later – fuelled by Bovril and salty popcorn – Ross was back on the trail, finally finishing on Sunday evening in time to enjoy a well-deserved Indian takeaway.

Wife Jackie, children Katie and Luke and Thistle colleagues were on hand to support Ross, along with a total of 38 socially distanced runners aged from two to 78, who joined him at various stages, accumulating an incredible 554 miles between them.

Ross said: “The support I received was amazing and I had continual company over the weekend. Moorfoots junior runners – who I help coach – joined me while my 13-year-old son Luke covered a half marathon distance. My friend Dave’s 100-year-old mum walked a mile for the first time in months and his wife Mo’s 93-year-old mum stood up every hour on the hour to show her support. Two police officers finishing their night shift even joined me at 3am for a loop!

“I want to give a shout out to all those who gave up their time to support and run with me. Their amazing support is similar to what Thistle offers people struggling with the impact of longterm health conditions on their lives. Thistle helps people build a community of support around the person to enable them to live their best life possible.

“I’ve learned loads from the people I’ve supported over the years and used their 'self management' tools to help me through the weekend, especially when my heart started beating faster – a common effect of salt depletion – but similar to before I had surgery, so I realised I needed to take a break. I woke up on Sunday morning feeling much better, started  running again and went through the whole  day resisting  checking my pulse to make sure I was ok.”

Mark Hoolahan, Thistle CEO, said: “We are so grateful that Ross took on this colossal challenge to raise much needed funds for Thistle. Developing a health condition can be life-changing and Thistle’s support means people are able to regain control of their lives and stop a health crisis becoming a life crisis.”

Thistle is an Edinburgh-based health and wellbeing charity supporting people who are struggling with a long-term health condition or challenging life situation. Find out more about support available at the Thistle website or by emailing referrals@thistle.org.uk

You can help Ross to reach the £3,000 target via Just Giving.