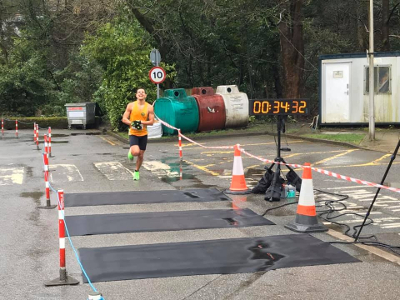 Sweetnam-Powell sweeps in at Huddersfield 10K

Any race held in the Pennines will have more than a few inclines and yesterday's Huddersfield 10K (Sunday 23 February) was no exception as runners found out from the word ‘go’. They were rewarded with a fast finish for their efforts which Joe Sweetnam-Powell took advantage of.

Huddersfield Road Runners AC (HRRAC) organise this race and it has been held every year since 1990. Perhaps it should be renamed ‘The Hilly Huddersfield 10K’ due to the undulations although this is to be expected in Yorkshire. Participants at Sunday’s race had surface water to deal with as well.

This value for money event sold out a few weeks beforehand, the scenic route one of the factors for this along with its challenging nature. Other factors are the efficient organisation, enthusiastic marshals and extensive prize list. It started and finished at Huddersfield Rugby Union Club.

There was large turnout from Steel City Striders and their gold and green tops were a distinctive sight amongst the field. Two of their members, Joe Sweetnam-Powell and Liam Walker were in contention for the title but Sweetnam-Powell swept over the finish line to win in 34:32. Walker was close behind to finish second in 34:45. Fionn Kerry of Holmfirth Harriers AC was third in 36:46.

It was strong running by Sally Armitage of Ilkley Harriers to win the women’s race in 42:02. Bridget Coomber of Denby Dale AC took second place in 43:07, beating her teammate Emily Cowper-Coles into third place in 43:35.

There were 568 finishers who were presented with a technical T-shirt followed by a well-earned drink in the club bar.