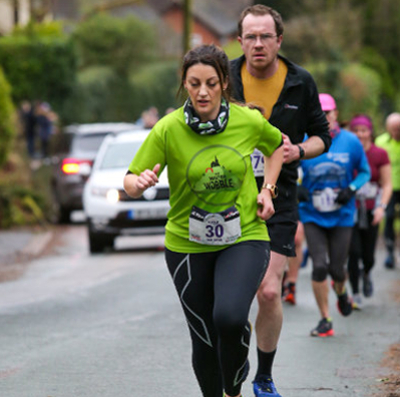 Walton Wobble 10K was one of several races postponed earlier this month due to Storm Ciara but nothing keeps a good event down. On Sunday (23 February) 250 runners proved where’s there’s a will there is the wobble.

More than a few runners were hoping the strong winds would propel them up the hills at this winter edition Walton Wobble 10K organised by JC Race Solutions. It had been deferred from the original date of 9 February following advice from the Met Office and fingers were crossed that the race would go ahead at the second attempt.

These were answered on Sunday as runners congregated at Walton High School in Staffordshire then after a safety briefing at 9.45am, made their way to the start ready for the off at 10am. Conditions were wet and windy but no storms thankfully as the field streamed away to follow a hilly course around the rather aptly named Walton-on-the-Hill. The climbs included a steep incline up Brocton Heights where the photographer waited to capture those painful moments.

Craig Pilsbury was the winner of this third Winter Walton Wobble 10K in 34:06. Scott Minshall was second in 35:55 with Jack Pickett of Wolverhampton & Bilston AC third in 36:46.

Sally Gray was the winning female in 42:27 with only three seconds between her and Charlotte Beddow of GB Ultras who was second in 42:30. Sarah Hetherington of ChaselifeUK was third in 45:59.

At the finish the medal/fridge magnet was a winner along with the Walton Wobble buff, and with Shrove Tuesday just around the corner, delicious pancakes to refuel with.

If you enjoyed the Winter Walton Wobble 10K, try the summer edition along with the Fiendishly Fun Run on Sunday 12 July. Entries will open soon at the JC Race Solutions website.