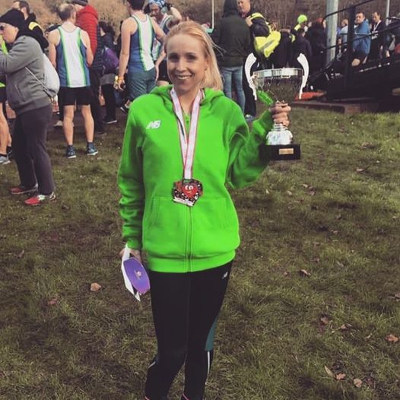 Gemma Steel put her heart and soul into Sunday’s (23 February) rescheduled race and was rewarded with a splendid trophy for her hard work and determination. She dedicated her win to the memory of her mother.

Run Your Heart Out Valentines 10K was another race that was rearranged due to extreme weather a fortnight ago. This was a well-organised and marshalled affair from Tape2Tape Events with the British Heart Foundation their charity partner.

Their two week turnaround was successful as over 1400 runners made their way to Scunthorpe, Lincolnshire on a cold and windy day. More than a few came away with a PB along with a huge medal.

Toeing the line was Team GB athlete Gemma Steel, ready to defend her title. She won the 2019 race in 34:31 but sadly, lost her mother around that time. Running helped her through this difficult period and she forged ahead with wins at Leicester, Nottingham, Bassingham and Heanor and the Midlands Counties Championships in January 2020.

The race started at 11am from Quibell Park and was held on a flat, closed road course that was also fast. A team of pacers helped many runners to a PB despite the headwind and marshal encouragement played its part.

Gemma of Charnwood AC won the women’s race in 36:26 and paid tribute to her mother saying “this win is for you mum”. She also thanked Tape2Tape Events for their efforts: “It was a great race and well done to the organisers for making it happen.” These sentiments were echoed by everyone who took part.

Richard Start of North Derbyshire RC was the overall winner in 31:25.

The organisers thanked the runners for their support on a memorable day.