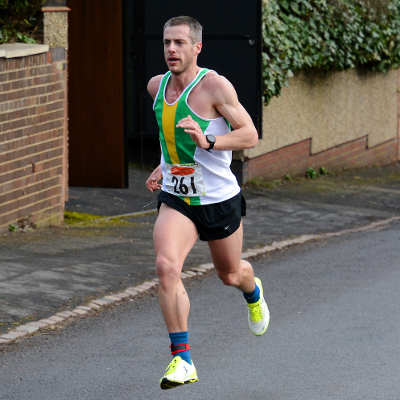 Supercharged Win For Woodward At Rugeley

There was an energetic display by Anthony Woodward at Sunday’s (18 February) Rugeley 10 in Staffordshire as the Notts AC runner powered his way to victory and a new course record.

Woodward was first across the line in 54:14, beating the existing course record of 56:43 set by last year’s winner Matthew Missen of Birchfield Harriers. Missen had to settle for second place this time in 56:07 with Daniel Soltys of Stone Master Marathoners coming third in 58:15.

Kristina Defries of Stone Master Marathoners won the women’s race for the second consecutive year, coming home in 1:06:03. She’d set a new course record of 1:04:31 in 2017 which still stands. Chelsea Baker of the Royal Navy was second in 1:08:26 followed by Michelle Buckle of Newcastle AC in 1:09:15.

The Rugeley 10 mile road race has a reputation as ‘challenging’ and it lived up to that with a hard, hilly course featuring scenic views of the surrounding area. The popularity of this race is such that all 300 places sold out weeks in advance, repeating last year’s sell out success.

A well organised event by Rugeley Runners, it started and finished at Redbrook Hayes School in Brereton with plenty of support from the marshals that was particularly appreciated at the undulating sections of the course. Not forgetting the musical encouragement half way up the hill at Upper Longdon that provided temporary relief from the pain. The uphills were replaced by a fast downhill stretch to the School where a souvenir t-shirt and goody bag awaited every finisher.