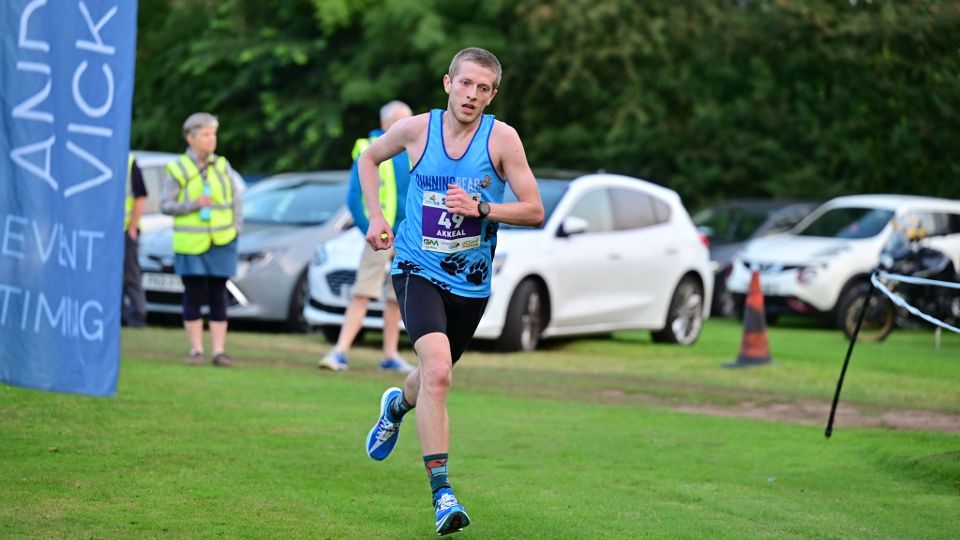 Impressive running by Kelly Butler to win the women’s race.

Akkeal Chambers was in turbo mode at Wednesday’s (25 August) Stone 5, powering around the hilly course to be first in this midweek race. The track specialist proved he was as equally successful on the road as over 600ft of elevation.

Chambers of Stockport Harriers is also an Ambassador for well known specialist retailer Running Bear and he along with six other colleagues took part in this challenging 5 mile road race organised by Mick Hall. The event fundraises for UK charity Lymphoma Action.

The Stone 5 Mile is also number 13 in the NSRRA programme and there was a good turnout of members from local clubs eager to snap up those all-important points that go towards the final standings.

Runners gathered in the sunshine at Oulton Cricket Club before making their way to the start, ready to set off at 7.15pm. Akkeal Chambers flew off the line and passed Jack Scott to take the lead early on in the race which he held all the way to the end. He ran two laps around Kibblestone and Oulton then turned into the Cricket Club and sprinted across the line to win in 28:04.

For the women, Kelly Butler of City of Stoke AC was in top form as she sped across the finish line as the winning female in 32:17. Sophie Mellor of Liverpool Harriers (and Manager at Running Bear) was second in 34:24 and Joanne Stanfield of Trentham RC third in 34:49.

The last runner finished in 1:10:14. The full set of results can be found on the RunABC Midlands Race Listings page.

Mick Hall thanked everyone who helped to make the race a success and was pleased to see so many familiar faces saying: “Cheers guys, it is good to be back”.