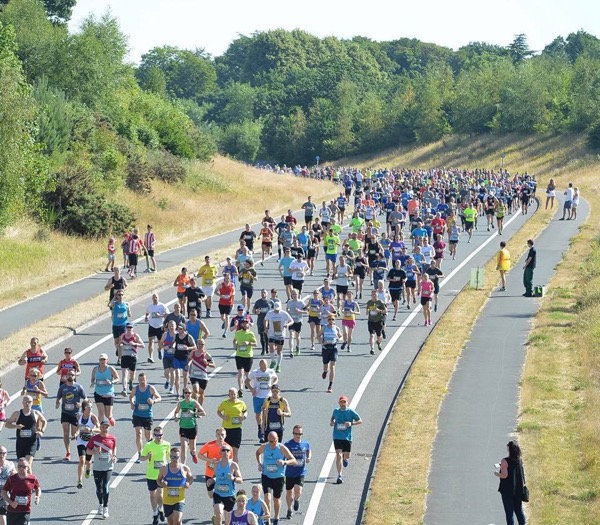 Glorious sunshine welcomed runners at the Alderley Edge 10K on Sunday (1 July) with 2,000 participants enjoying a superb morning of racing. The start was outside the grounds of Royal London before runners headed out onto the Alderley Edge Bypass taking in the breathtaking scenery across the Cheshire plains.

Staged by Run North West, the race had altered its distance from the original five miles to 10k, a move that resulted in organisers posting 'sold out' notices. Sunday proved to be no different with a fantastic turnout and competitors from Australia and Germany represented, while running clubs from across the North West were out in force.

Despite the tough conditions, there were some fast times posted across the board, with Blackburn Harriers’ Ben Fish first to cross the finish line in 31:49. Tipton Harriers’ Stuart Hawkes took second (32:20) and Chris Williams third (32:58).

Kirsty Longley showed no signs of fatigue from her exertions at the Tour of Tameside (at which she recorded a fourth consecutive victory) by securing first in 36:18. Sale Harriers’ Katherine Wood (37:50) and Sarah Murphy (37:56) were second and third respectively.

Behind the elite field, runners of varying abilities took to the fully closed bypass. many running in their first ever race. In addition the Family Fun Run proved to be a popular hit.. The event was supporting the Roy Castle Lung Cancer Foundation,

Event manager Jonny Mellor commented: “Well done to everyone who took part in this year's event, with extremely tough conditions. Unfortunately it wasn’t a morning for personal bests, however it was great to see so many excellent performances despite the hot weather.

Jonny continued: “It’s amazing to see such a wide range of runners taking on the bypass all running for different reasons, from those running their first events to seasoned marathon runners testing themselves over 10k.”

The Alderley Edge 10K returns on Sunday 7 July, 2019. Entry is available at the early bird price of £16 until the end of July.