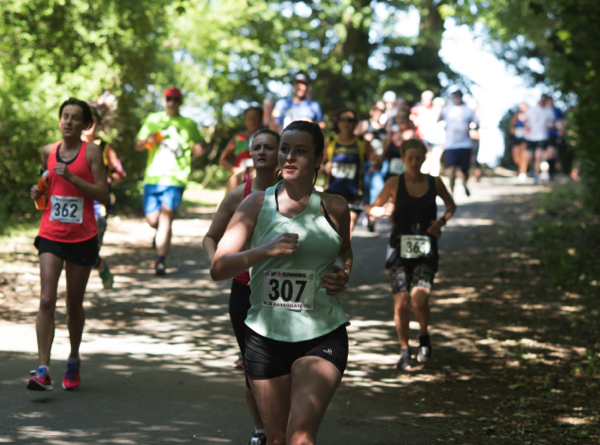 Even in some seriously difficult conditions, the inaugural Run Harrogate 10K got off to the perfect start with over 400 taking part in Sunday’s (1 July) race. The event, organised by Harrogate Harriers is a long standing fixture in the calendar but this year was the first to be held over a new course – relocating from the roads of Harrogate town centre to a mixed terrain loop through the Crimple Valley.

There was a jovial atmosphere as runners gathered at the Harrogate Squash and Fitness Centre. Fast club athletes mingled with charity fundraisers, and first timers with teams drawn from local businesses to compete the Berwins Corporate Challenge Shield. All were treated to a pre-race pep-talk and warm-up from local coach Ian Rowbotham before departing at 10am sharp.

Mike Burnett of Leeds City was the comprehensive winner in 36:02, more than three minutes ahead of Thomas Barwick (39:26) and Charley Robson (39:27). It was a similar story in the female competition as Lucy Williamson was the clear outright winter in 43:44, followed by Nicky Andrews (46:50) and Sharon Hardcastle (48:12).

Feedback from the field suggested that the event lived up to its billing as ‘beautiful and challenging’ with the course incorporating some of the less travelled roads and paths in the district. The final ascent up the Crimple Killer rounded the race off with a fitting test of character as the finishing line was in sight.

You can view full results from the race here.