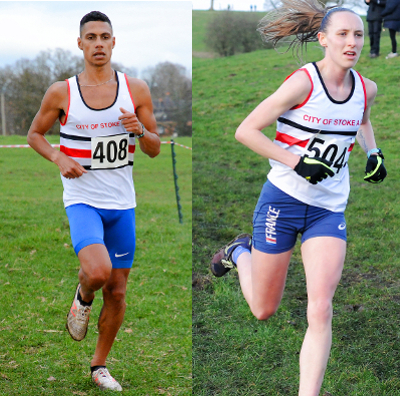 A change of venue proved to be a winning move for City of Stoke AC’s Alex Brecker and Katie Holt at the Staffordshire AAA Cross Country Championships (Saturday 4 January). They repeated their 2019 victories at the new location.

These championships were due to be held at Stafford Common – an often used venue by the North Staffs Cross Country League amongst others. However, recent floods left the course in a waterlogged state and unsuitable for running so the event was moved to Betley Court Farm in Crewe. Spikes were still recommended.

Local clubs fielded strong teams who were keen to battle it out at this, running hard and fast for points and places. Waiting for them was an undulating course on open farmland, part of which skirted the scenic Betley Mere and a couple of dirt tracks.

The U20 Women/Senior Women & Veteran Women’s race started at 1.05pm and they completed two large laps (6.5K) in total. Katie Holt of City of Stoke AC was in imperious form as she raced to first place in 22:56. Katie Lord of Notts AC followed her in 25:14 with Holt’s teammate Lucy Hayes third in 25:23.

At 1.45pm it was the turn of the U20 Men/Senior Men & Veteran Men who had three laps to complete (9.7K). Alex Brecker of City of Stoke was a favourite and didn’t disappoint as he was first across the line in 32:06. Richard Carpenter of Tipton Harriers was second in 32:37 and Christopher Perrin of Cannock & Stafford AC third in 32:42.

It was a successful day for City of Stoke AC though all the clubs can be proud of their performances at this highly competitive event.