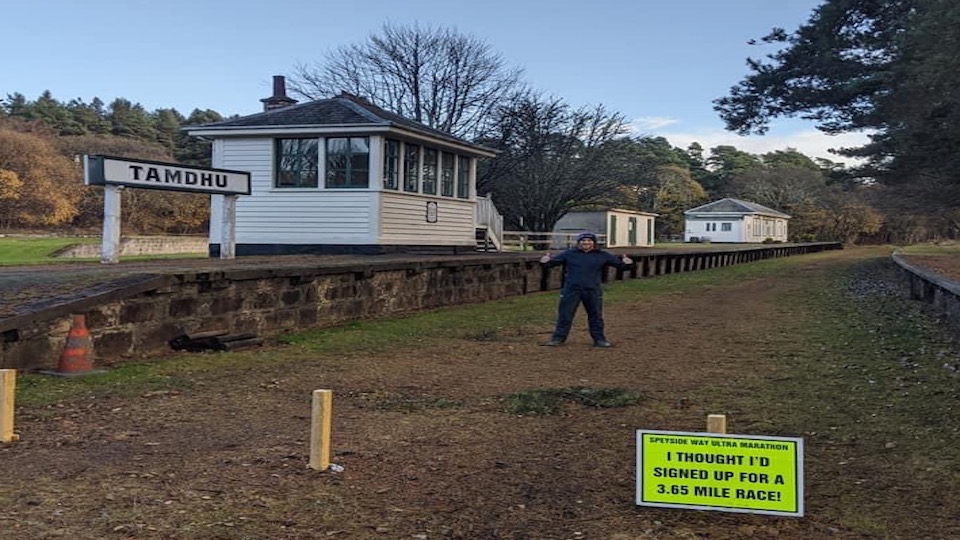 Smooth running after a bumpy few days at the Speyside Ultra

81 runners completed the 36.5 miles of the Speyside Way Race – from Ballindalloch to Buckie – on Saturday (14 November).

The unusual distance – justified, as one of the event’s infamous signs has it, ‘Because 37 would be stupid’ – takes runners on an early morning journey along one of the North-East’s best known long-distance paths.

Originally scheduled for the summer, the event was pushed back to November in the hope that it could go ahead with minimal changes to its format.

In the end, the new winter date brought its own problems. Tier-related travel restrictions announced the week before the event meant that many runners were unable to attend, including the favourite for the women’s race, GB ultra trail-runner Meryl Cooper, currently based in Fife.

Other favourites, including Commonwealth medallist Robbie Simpson and Scotland international Kenny Wilson, had pulled out of the race for other reasons.

This edition of the Speyside Way Race was the first to be directed by Kyle Greig and his wife Debbie, and will form part of their new Moray Way Ultras Series next year.

The pair were ‘gutted’ that so many runners living outwith the area ‘couldn't be a part of the Speyside Way family this year’. Those who were able to take part were full of praise for the Greigs, the marshalls and the volunteers, with many commenting about how good it was ‘to be pinning on a race number again’.

One first time ultra runner wrote on social media: “It was such a thrill being on a start line again and crossing the finish line for my first ultra medal. Can’t wait to do it all over again … next year!” Another wrote that they “couldn't have asked for a better introduction to ultra running”.

Metro Aberdeen’s Chris Richardson won the event – his first ever ultra – in a time of 3.56.51 – five minutes quicker than the previous record of 4.01.42. Richardson’s clubmate and Dee33 Ultra winner Jason Kelly followed behind at 4.03.29, with the current title holder Grant Jeans taking the last podium spot (4.19.55).

Rees-Jenkins told runABC Scotland online: "It was beautiful: autumn at its best with perfect running conditions.

"I had to ease off around the 20 mile point as my calf was finding it a struggle. I'm training for mountains, and so not used to the flat! I just ran for a bit and walked a bit until the end. And loved it!  I caught up with marshal buddies en route and soaked up the daylight rays.

"Working long shifts has meant I haven't seen much light, so it was pure joy to do this run. I finished with a sprint and grinned all the way home."