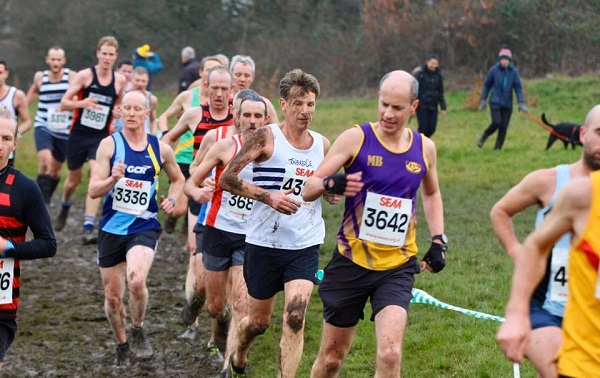 The last weekend in January traditionally hosts one of the undoubted highlights of the winter season – the Area Cross Country Championships. The South of England AA Championships returned to the famous home of cross country, Parliament Hill Fields, where just under 3,700 battled muddy hills on one the toughest cross country circuits in Britain, as illustrated in our image of the senior men's race above.

Three laps totalling 15K was the challenge for the senior men on Saturday (25 January) and there was a talented line up of 1,172 representing their clubs. Quality often finds a way to win, whatever the conditions, and despite some concerns about a twisted ankle the current British champion, Adam Hickey (Southend) moved well clear for victory by a yawning 51 seconds.

The runners-up were Alexander Leprêtre (Highgate Harriers) and Dylan Evans (Shaftesbury Barnet Harriers) as there were a number of fallers in the sticky going. The Southern is an important litmus test for relative club strength and it was Aldershot, Farnham and District that emerged as champions from Tonbridge AC and Highgate Harriers.

The senior women's 8K race saw a maiden Southern title for Jess Gibbons (Reading AC) with a handy cushion of 21 seconds over Nicole Taylor (Tonbridge) who had her hands full with the fast finishing Lizzy Janes (Herts Phoenix) – with just a second to spare at the finish line.

There were 694 finishers in the women's championships and the team winners were Highgate Harriers from Aldershot and Tonbridge, with a familiar look to the eventual medal winners.

There is always great excitement as the younger athletes' events reach their climax and the closest finish of the day came in the junior men's race, won by a whisker by Matt Stonier (Invicta East Kent) from Tomer Tarragano (Brighton & Hove) as both shared 26:05 for 8K.

As for the most successful club – Aldershot, Farnham & District probably edged it with two team gold medals, two silver and a bronze including their senior men's title.