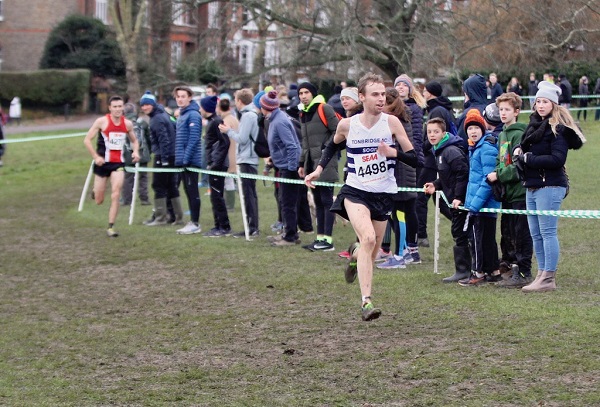 Pearce lights up Parliament Hill as clubs battle for honours in 'the Southern'.

There were 3,680 finishers in the 10 races that form the annual South of England Cross Country Championships held at Parliament Hill Fields in North London, on Saturday (26 January). This magnificent total included 703 senior women and 1,154 senior men, who were competing in good conditions on one the toughest cross country circuits in Britain.

Aldershot, Farnham and District can once again claim top club status with four team gold medals, including the flagship senior men's 9 miles, but in a remarkably open championships all 10 races were won by athletes from different clubs.

Tonbridge AC and Shaftesbury Barnet Harriers were the most successful clubs for individual medals with four apiece, but Tonbridge edged ahead for kudos due to a maiden championship victory for Henry Pearce (senior men).

On a day of tight and exciting finishes the closest team race saw Windsor, Slough and Eton tied with Shaftesbury Barnet Harriers for the U17 Women's title – resolved in Windsor's favour on countback – with Guildford & Godalming AC only five points behind for bronze.

Two races were won by a single second. Ruby Vinton (Ipswich Harriers) was pushed to the limit by Lily Slack (Tonbridge) in the U13 Girls race and Louis Small (Ashford) had the same narrow margin for the U15 Boys title from another Tonbridge silver medallist, Matthew Taylor.

Shaftesbury's David Stone had a 'comfortable' two seconds margin over Will Barnicoat (Aldershot) in the U17 men's race but arguably the closest finish, as a percentage of overall time, came in the senior men's 15,000m race.

Henry Pearce has been lighting up his personal records recently, with 2:19:23 for the 2018 Toronto Waterfront Marathon and 29:26 in the Ribble Valley 10K on 30 December, but he did not start the Southern as favourite. That mantle fell to experienced international and current English National champion (on this course) Adam Hickey, of Southend. However, a brilliant finish saw Pearce prise a precious four seconds for victory over last year's runner-up, Hickey. Ed Shepherd (Woodford Green with Essex Ladies) was third. Aldershot took team gold from Tonbridge, with Serpentine RC third.

Full results are at South of England Athletic Association