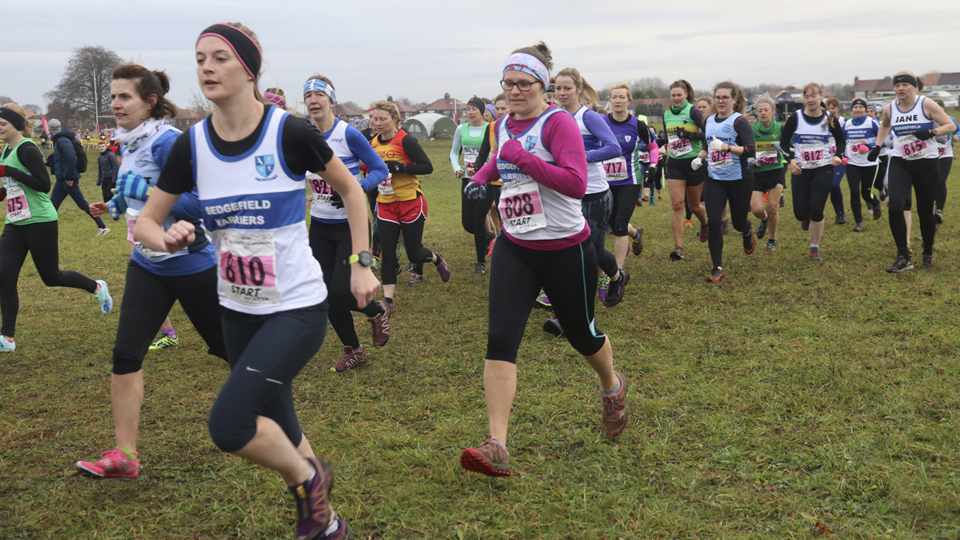 Hundreds of runners from around the North East descended on Sedgefield on Saturday for the 115th North Eastern Counties Athletic Association (NECAA) Cross Country Championships. Hosted by Sedgefield Harriers in Hardwick East Park, the event is an iconic fixture on the region’s grass roots sports calendar, with races for junior and senior athletes from under 11s to senior men and women. The event returned to Sedgefield for the second time in six years.

The action began at 10:35am with races for under 11 boys and girls, started by Cllr Ann Carr, Mayor of Sedgefield, and Cllr Mel Carr, Chair of Sedgefield Town Council. The NECAA championship races kicked off at 11:00am, with a series of events for U13s, U15s, U17s and U20s, and culminating in the races with the biggest fields, for senior men and senior women.

Despite rain and snow in recent weeks, the course was in good condition and proved popular with athletes, presenting them with a good balance of climbs and flatter sections through the three fields that constitute East Park.

You can link to the full results from runABC North's race listing page here.

Sedgefield Harriers recruited a large team of volunteers to put on the championships, with over 50 club members contributing, along with representatives from other clubs. Staging the event was a big community effort. Sedgefield Cricket Club hosted the race headquarters, St. Edmund’s Explorer Scouts put up marquees, Number Four tea room supplied sandwiches for the officials’ packed lunches and fruit came from The Juicy Pear. Event catering for runners was provided by Ramside Estates.

Event organiser Chris Lines commented: “We were delighted that North Eastern Counties Athletic Association entrusted their event to us, and I think that we repaid that trust in full. A lot of preparation by a lot of people meant that the day itself went very smoothly and was a thoroughly enjoyable experience for me!

"Massive thanks go to all of our volunteers – scores of Sedgefield Harriers, members of other clubs, the Explorer Scouts, event officials, photographers, and many more people in all sorts of different ways.

“We’re hugely grateful to Durham County Council for allowing us to host the event in East Park, and to the team at Hardwick Park who were really supportive. The weather didn’t misbehave too much and feedback from runners was that it was a really good cross country course - fair, but challenging and in a lovely setting.

"It was brilliant to see runners of all ages in action here in Sedgefield, representing clubs from all over the North East at one of our region’s iconic grass roots sports events.”

You can find out more about Sedgefield Harriers here.