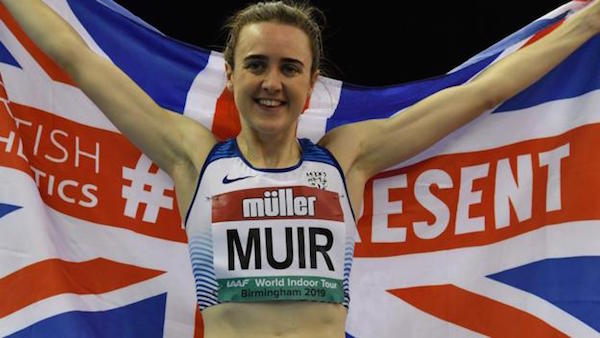 A record nine Scottish runners have been selected by British Athletics for the 2019 European Indoor Championships (1–3 March).

The nine athletes chosen for Glasgow 2019 will be an important part of the 48-strong GB and NI team, and represent the largest Scottish contingent at these championships for more than 50 years.

By comparison, only six athletes from Scotland were chosen for the 2015 and 2017 editions of the competition.

At the most recent games in Belgrade, Scottish women in particular added substantially to Team GB’s medal haul. Laura Muir won two gold medals, Eilish McColgan took a bronze and Doyle a relay silver. All three athletes have been chosen for the Glasgow 2019 team.

Fresh from breaking the 31-year-old British record for the women’s indoor mile by just under five seconds in Birmingham last weekend, Muir will be defending both her 1500m and 3000m European indoor titles from 2017 at the Emirates Arena.

Speaking of her win, Muir told BBC Sport: "I knew I was in great shape. It was about winning the race, but also about running fast. I'm so chuffed to get the record on home soil.”

Joining Muir will be her fellow European indoor medal holders Eilidh Doyle and Zoey Clark, who will also be contesting two events each: the 400m and the 4 x 400m relay.

In addition to the five women, four Scottish men have also got the nod.

Andy Butchart and Chris O’Hare will take on the 3000m, the latter stepping up from the 1500m distance which previously won him a European indoor bronze.

Rounding out the Scots, Neil Gourlay will contest the 1500m and Guy Learmonth the 800m.