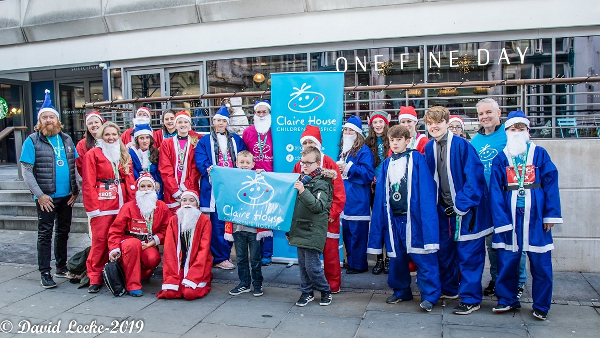 Santa’s dash off a large donation for Claire House

Thanks to the fundraising efforts of a remarkable team of almost 200 at December 2019's BTR Liverpool Santa Dash over £11,000 was raised for Claire House Children’s Hospice.

The running community are known for their generosity and 185 of their members in red and blue Santa suits completed the North West's favourite fun run on behalf of Claire House Children’s Hospice. They got December off to a seasonal start at the 16th BTR Liverpool Santa Dash – the UK’s biggest festive 5K that attracted 6,000 people, all of whom enjoyed a magical mini tour around the home of the Liver Birds.

Amongst the fundraisers were a group of 20 players and their parents from Neston Nomads Girls U14. The Girls are keen supporters of Claire House and have raised more than £5,000 for them through various activities. Others included a team from the Carpenters Group, Mowgli Restaurant, Livent and Starbucks.

Merseyside-based Claire House Children’s Hospice has two sites – one at Bebington on the Wirral and the other at West Derby, Liverpool. They both provide specialist care and support to terminally children and their families, enabling them to make memories however short their time may be. These include music therapy, physiotherapy and occupational therapy and respite care.

Claire House Children’s Hospice Running & Challenge Fundraiser, Laura Fallon was touched by the kind-hearted efforts of those taking part saying: “It’s a fantastic amount of money for the charity and so far, could pay for five months worth of play therapy. We would like to thank everyone who supported Claire House – you are all truly incredible!”