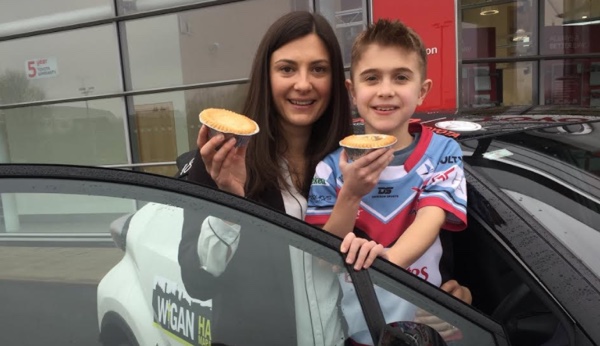 Run Wigan’s Giveaway No Pie In The Sky

Each and every runner knows the enjoyment that comes with replenishing the calories used during a race so the decision by organisers of the Run Wigan Festival to offer every half marathon and 5k participant a free pie when they cross the finish line on Sunday 18 March will be a popular one.

The event, launched last year following the previous success of the town’s 10k race, attracted over 4,000 runners across the half marathon, 5k and family mile distances. All three races will be started by Jack Johnson, now aged 10, who is the inspiration behind the Joining Jack charity.

Jack has been fighting Duchenne since he was diagnosed at the age of three. His parents mum Alex, and dad, Andy, a former rugby league professional for his home town of Wigan, set up the charity in 2012 and next month’s run will be the charity’s seventh major running event.

Organiser Matt Johnson, Jack’s uncle, said: “The 10k has been such a special day for us over the past five years that we didn’t know whether the Run Wigan Festival would be as widely accepted. All of us were overwhelmed at how popular it has been and wanted to do something to say thank you.”

“It was actually Jack’s idea. When we were planning this year’s event in the office we were trying to think of something we could do for runners in our second year and Jack said ‘why not give them a pie?’ “We thought it was a great idea and we are hoping that the gesture will encourage a few more runners to sign up over the next three weeks as we count down to the big day.”

You can still enter the Run Wigan Half Marathon, 5K and Family Mile here.