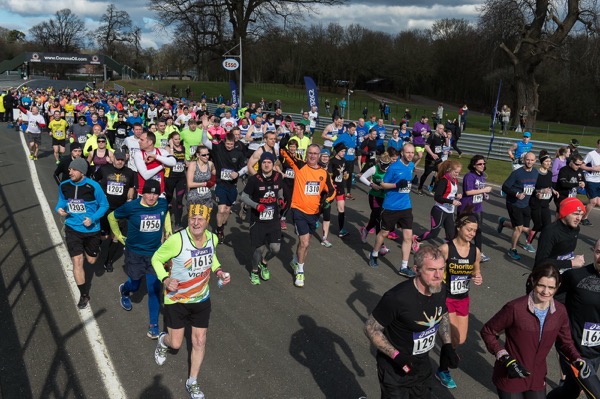 Oulton Runners In The Pit Lane

Speed will be at an optimum this Sunday (25 Feburary) when 1400 runners make their way to the famous Oulton Park motor racing circuit. Organised by Xtra Mile Events, the ASICS Oulton Park Half Marathon and 10K are held entirely on the fantastic Oulton Park race-track and provide a thrilling finishing straight in the pit lane.

As with their sister event the Greater Manchester Marathon, the Oulton Park Half and 10K has been designed with speed in mind. The course offers a smooth, traffic-free surface and a number of excellent vantage points for friends to watch and cheer on competitors.

The track, built into the contours of the Cheshire countryside, is regarded as one of England’s most picturesque motor racing circuits. Runners in the half marathon will cover six laps with 10K competitors tackling three.

New for half marathoners this year is the Running Club Clash, which pits affiliated clubs against each other with the fastest three accumulative times recorded claiming first place. On offer are two prizes of three pairs of ASICS Gel Nimbus.

Reports from race HQ suggest that one runner, Matt Shaw, has set his sights on a course record at Sunday’s race. Tom Charles’ 1:10:38 set last year is currently the fastest recorded time at the event,

Look out for runABC North’s race report next week to see if any records are broken at the 2018 ASICS Oulton Park Half Marathon and 10K.