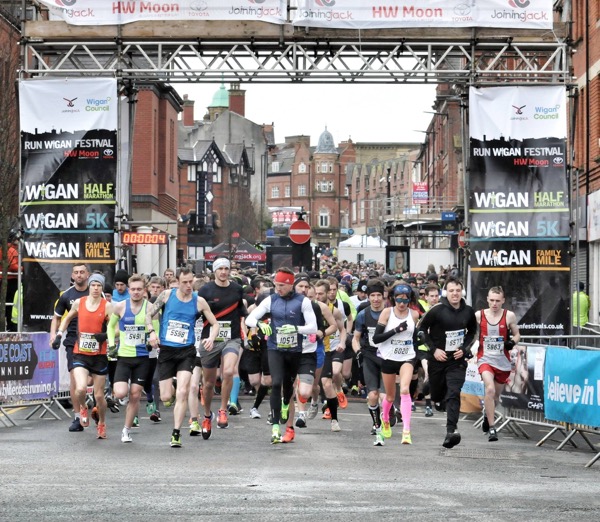 The 2019 staging of the Run Wigan Festival will be the biggest yet with organisers Joining Jack confirming the addition of a new 10 mile event. Scheduled for Sunday 17 March, the festival will now comprise a half marathon, 10 mile race, 5k and family fun run.

Speaking of the decision to add the 10 mile distance, organiser Matt Johnson said: “I think a lot of people want to take part in our events because they really like them, but think it’s quite a hard course around Haigh Hall. They want to take part and might be training for other half marathons or marathons.

“I looked at it and thought 10 miles is a classic distance and is becoming popular at other events, so we could use the same route. We don’t want it to have a detrimental effect on the half marathon, so we are going to restrict it to 450 people.”

News of the festival shake-up comes after the event invited runners to take part in a virtual half marathon after organisers were forced to cancel March’s 13.1 mile race due to heavy snowfall. The response from the running community was strong, with close to 700 taking part throughout April.

Launched in 2017 following the success of the town’s 10k race, the festival proved to be a massive hit with 4,000 runners competing across the trio of distances. The face of the event is Jack Johnson, the inspiration behind the Joining Jack charity.

Jack has been fighting Duchenne Muscular Dystrophy since he was diagnosed at the age of three. His parents set up the charity in 2012 and the festival has raised invaluable funds to develop research into a treatment and cure for DMD.

Registration for all of the events at the Run Wigan Festival is available here.