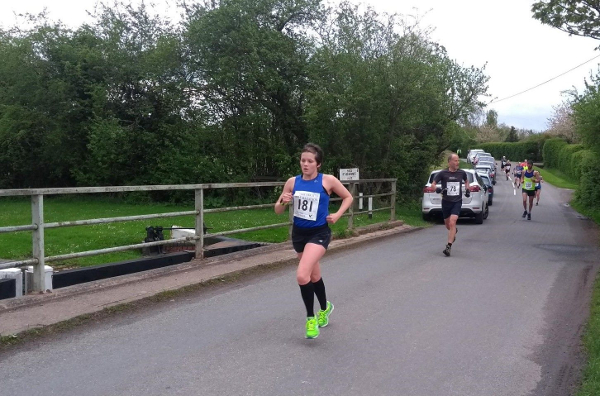 Best Of Three At Droitwich

Three was the magic number at the Droitwich Half Marathon which took place last Sunday (29 April) after being postponed twice due to snow.

The organisers, Droitwich Athletics Club were determined that the event would go ahead and it was third time lucky as more than 260 runners completed this scenic half marathon. Held in a rural location they followed an undulating course on country lanes around Droitwich Spa in Worcestershire and the weather was kind to everyone this time.

The field included Tracy Dean of Staffordshire Moorlands AC who is tapering for the IAU 24 Hour European Championships later in May. The Team GB runner chose the Droitwich Half as part of her race preparation and went on to finish third lady.

Karl Welborn of Tipton Harriers won the men's race in 1:13:54, over three minutes ahead of James Marshall who was second in 1:17:06. Neil Laurenson of Black Pear Joggers came third in 1:17:27.

There was classy running from another top flight athlete, Sara Willhoit of Shrewsbury AC who won the women’s race in 1:31:09. Sara is equally accomplished on the fells and has been selected along with three of her team mates to represent Shropshire in the Inter-Counties Fell Running Championships. Sarah Conway of Birchfield Harriers was runner up in 1:32:49 followed by Tracy Dean in 1:33:55.

A well organised and supported race with something for every runner irrespective of ability and a vote of thanks for the weather gods!