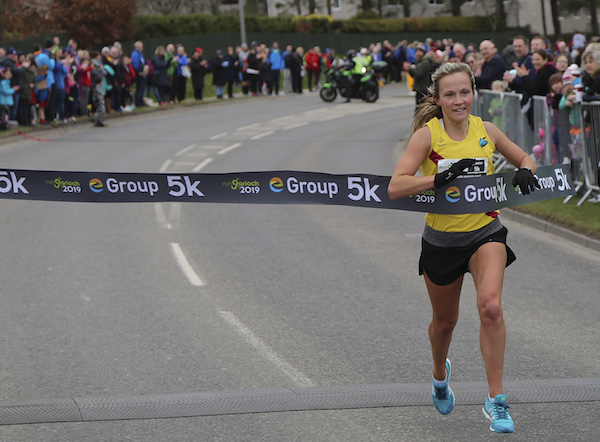 Commonwealth bronze medallist Robbie Simpson fought the wind and cold to claim a Scottish half marathon victory a second time in as many weeks at Inverurie’s Run Garioch yesterday.

Deeside Runner Simpson, who has previously won both the event’s half marathon and 10k races, finished just under four minutes ahead of second placed Tom Roche (JSK Running Club) in a time of 1.12.40.

Speaking after the eGroup Half Marathon Simpson said: “It’s a great course, but was it quite a headwind for the first eight miles, but that meant it was at your back for the way home. I just didn’t feel like I was running very fast today!”

Even though yesterday’s race was on his home turf, third male David Barclay (Garioch RR), said he had ‘never experienced such windy conditions’ in all his years of running.

The women’s race was won by super-veteran Veronique Oldham (AAAC), well-known locally for her talents as a hill runner. Following closely on Oldham’s heels were Lynsay Hay (1.29.48) and Rebecca Young (1.33.18).

Gauld, the only woman to have ever won the race outright, this year finished 40 seconds clear of Kelly Williamson, who in turn bested Emma Murray by 10 seconds.

A strong performance by Jenny Bannerman (Inverness Harriers) in the eGroup 5K saw her nearly equal Gauld’s achievement in winning her event outright. Her time of 17.01, a new women’s course record, by two seconds, was just four seconds short of that of Jordan Chapman, who broke the tape at 16.57. Finishing behind Chapman and Bannerman were Matthew Douglas (17.38) and Matthew Dailey (17.41).