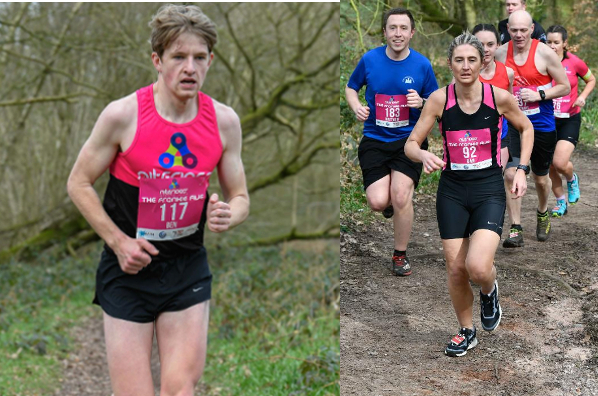 There were wins for Ben Meir and Kerry Dixon at Saturday’s (23 March) Frankie 5 Trail Race. They were amongst 150 runners who paid their respects to ‘The Boss’...

The local running community came together on Saturday morning in memory of a very popular man who inspired everyone he met. Francis Hamlett a.k.a. ‘The Boss’ tragically died in November 2017 after suffering a cardiac arrest while mountain biking in Apedale Country Park. A member of Trentham RC and founder of the Niteriders cycling club, he was known for his generosity of spirit and sense of humour.

PT Rachel Trpeski and her team organised the Frankie 5 Trail Race and following a discussion with Francis Hamlett’s family, all proceeds would go to the Douglas Macmillan (Dougie Mac) Hospice.

Hanchurch Woods was the location for the 5 mile race with the Kids 1 mile Fun Run at 10am followed by the adults race at 11am. There was a good camaraderie between the runners as they tackled a hilly course that was muddy in places before finishing near Shamblers Football Club.

Ben Meir of Newcastle (Staffs) AC was first across the line in 31:43 followed by his teammate Bruce Johnson in 32:58. Roger Taylor of FRA was third in 33:18.

Kerry Dixon of Trentham RC was the fastest female in 38:01. Teammate Victoria Ison was second in 40:38 with Maxine Bickerton of Newcastle (Staffs) AC third in 40:53.

Harvey Raywhite won the Frankie Fun Run in 8:54; Freya Hill was the winning girl in 11:10.

There was a medal, pink T-shirt and goodies for every finisher and a sense of pride in a job well done.

Rachel Trpeski thanked everyone for their help and support saying: “We will be back next year.”