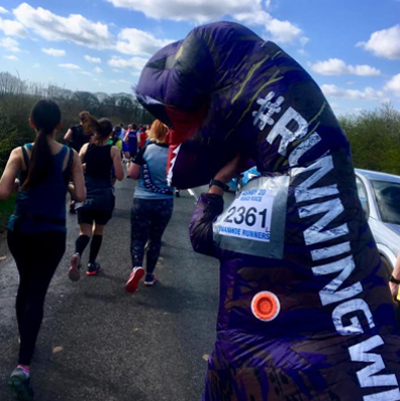 A Tyrannosaurus Rex toed the line with hundreds of runners at Sunday’s (24 March) ALDI Ashby 20. They were joined by the Ivanhoe gorilla...

Last year’s race was cancelled due to the ‘Beast from the East’ but there were no such fears for the hosts Ivanhoe Runners as blue skies and sunshine were the order of the day.

The ALDI Ashby 20 is a well-established and popular race that is known for its slick organisation and community feel. The highly coveted hoody is another reason to enter and this has taken on iconic status with runners proudly wearing it in their workplaces the following day.

Taking part was Graeme Lloyd AKA ‘Running with Rex’ who was dressed in a giant inflatable dinosaur costume as part of his charity endeavours. He is running a series of half and full marathons on behalf of Coventry and Warwickshire Mind to support young people with mental health issues.

Bath Grounds, Ashby-de-la-Zouch in Leicestershire was the venue for the two-lap, undulating race that went in a circuit through Packington, Measham, Swepstone, Heather and Normanton le Heath. There were four drinks stations, gels and jelly babies and plenty of support from marshals, volunteers and the local population.

Every finisher received the prized hoody (purple) and a reusable goody bag containing the famous cheese cob. There was an extra treat in the form of a free carvery, courtesy of The Beeches Pub.