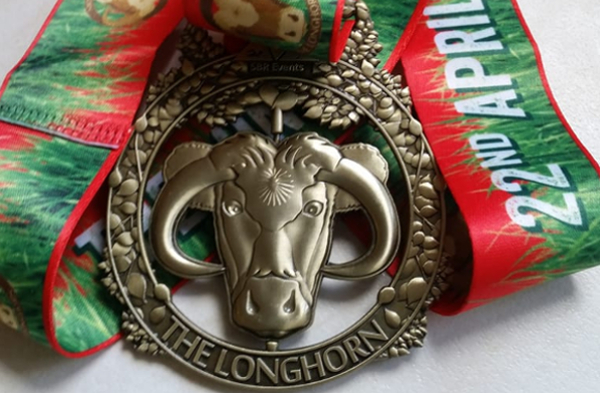 Rounding Them Up At The Longhorn

There were no strays as two and four-legged runners stayed on course at The Longhorn (Sunday 22 April) as a big field dealt with heat and hills at this multi-lap event in Nottinghamshire.

The Grade 1 listed Thoresby Hall was the venue for The Longhorn, a challenging off-roader from SBR Events with a choice of distances to suit both sprinters and endurance runners. There was 5K, 10K, half marathon, marathon and a 60K ultra on private land in Nottinghamshire’s National Nature Reserve and Sherwood Forest.

Walkers were equally welcome. They had the option of taking part in the 5K or the Nordic Walking category with the option of 5K, 10K or half marathon. These three distances were also open to Canicross entrants and man’s best friend made the most of grassy paths, trails and woodland despite the hot weather. They were kept well-hydrated thanks to the water stations manned by kind volunteers who ensured the dogs had plenty to drink along with their owners.

Elliot Palmer of Absolute Triathlon won the 5K in 18:40. Amber Wilkins of Heanor Running Club was the fastest female in 21:47.

Daniel Whitaker of Balance Performance won the 10K in 37:19. Emma Blades was the winning lady.

Mountain/ultra runner Tracy Dean of Staffordshire Moorlands AC won the Marathon in 3:19:29. Steven Rye of Team Derby Runner was the winning man in 3:25:58.

Philip Nind of Lincoln & District Runners won the Ultra in 5:10:29 with Bonita Robinson of Hermitage Harriers the first lady in 5:55:47.

Race finishers were rewarded with a new, bespoke medal and a certificate for their achievement.