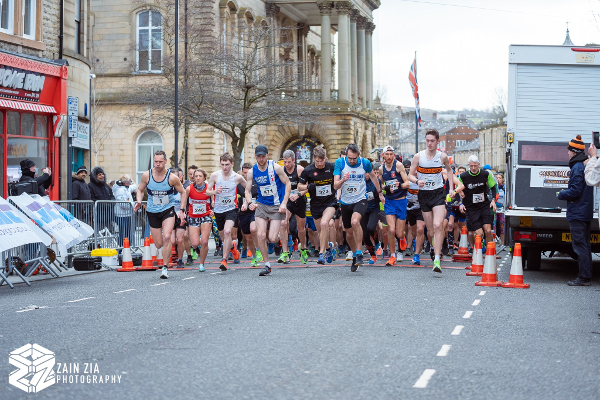 Around 400 runners enjoyed a fast downhill to the finish at the Ron Hill Accrington 10K on Sunday (1 March). The inspirational signs featuring the legendary athlete may have given them that extra impetus.

The OMC Motor Group Ron Hill Accrington 10K from Cannonball Events was named in honour of the town’s famous son who inspired many to take up the sport. Ron, a world record holder and European and Commonwealth Games gold medllist, ran every day for 52 years and 39 days without a break and in 2017, received a Lifetime Achievement Award at the ASICS Greater Manchester Marathon.

Participants in Sunday’s race had their own achievements to be proud of whether they were running for fun, a charity or a PB. There was also a 1 Mile Fun Run for youngsters, newcomers and wheelchair athletes held on an out and back course on the closed Blackburn Road.

There was a lively atmosphere as everyone gathered on Blackburn Road ready to start with the race that was live streamed by Retinair. They sped away at 9.30am along a scenic, undulating route and to help them on their way were a selection of blue motivational signs each with a photo of Ron Hill.

Luc Burnip of Stadium Runners dominated throughout and was first across the line in 34:19. Ben Costello of Blackburn Harriers & AC was second in 34:48 with Peter Lightning of Kent AC third in 35:16.

Along with the free medal for every finisher was a sweet goody bag containing a free sample from Kendal Mint Co and a confectionary collection from Roch Sweets.