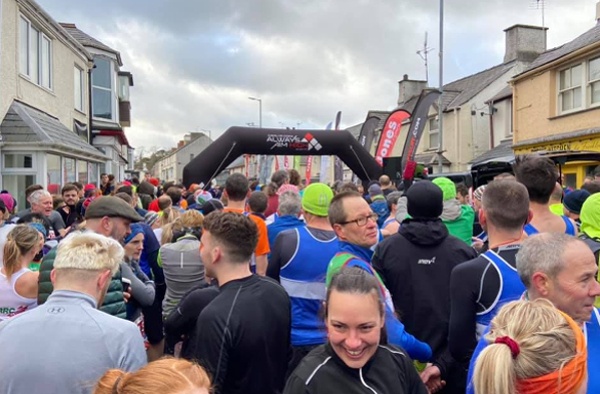 Anglesey Half Marathon & 10K rises to a stormy challenge

Adaptability was the watchword at Sunday’s (1 March) Anglesey Half Marathon & 10K after Storm Jorge tried to spoil the day. There were changes to the start and half marathon coursebut it was business as usual at this much sought after event.

The 2020 Jones Crisps Anglesey Half Marathon & 10K was a lesson in contingency planning from organisers Always Aim High Events who adopted a proactive approach to the threat posed by the incoming storm. They decided the event would take place and worked closely with the Highways Agencies and local authorities to ensure that it was safe to run whilst still delivering a memorable experience.

The three races – Half Marathon, RibRide Dragon’s Dash for youngsters aged 5 to 15 and 10K started at 9am, 9.20am and 9.40am respectively. There was no change to advertised times.

Strong winds meant the race start had to be moved from the iconic Menai Suspension Bridge to the Menai Bridge High Street. Then a fallen tree the night before caused the organisers to switch to their emergency route for the half marathon that included a few tough climbs. Runners were still treated to breathtaking views of Snowdonia and the Menai Straits as they followed the undulating, picturesque course.

Martin Green of North Wales Road Runners battled his way to a win in the half marathon, finishing in 1:21:08. Lucy Williamson of Ilkley Harriers AC won the women’s race in 1:32:56.

For Director of Always Aim High Events Tim Lloyd it was about not giving in: "Storm Jorge couldn't beat us and it didn't put a dampener on the atmosphere on the course or event village."