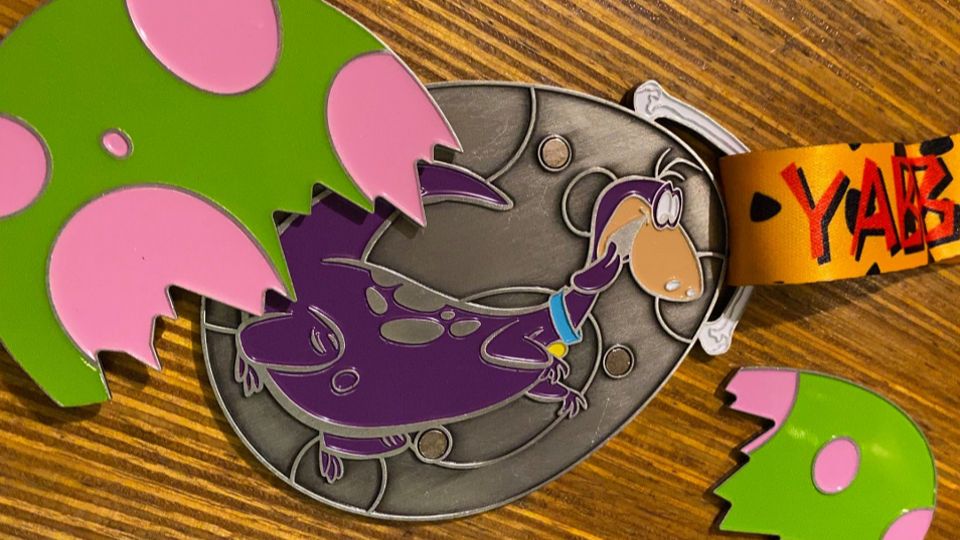 The change of venue was given a ‘thumbs up’ by runners at Saturday’s (19 September) Yabba Dabba Doo event. The cracking medal was equally popular at this Flinstone-inspired event.

In normal times, Yabba Dabba Doo would have taken place at Chasewater Country Park in Staffordshire and involved running multiple 5K laps around the reservoir. However, due to the coronavirus situation, organiser Denzil Martin of How Hard Can It Be Events & CODRC relocated it to Coalport in the Ironbridge Gorge, Shropshire. It still retained the lap format and over a choice of distances: 7 miles, 14 miles, 18 miles and Marathon.

There were staggered starts between 7am and 10.30am, hand sanitisers and other safety measures at this Covid-secure event. The Indian summer weather was an added bonus as they headed off along a scenic course that included the Silkin Way, a few roads and over the Ironbridge, the latter more than once depending upon the distance.

Denzil’s races are known for their friendliness and support and Saturday’s event was no exception as everyone had a word (or words) of encouragement for each other.

Every finisher received a medal resembling an egg that opened up three ways to reveal 'Dino', the Flintstone's pet dinosaur.

For the runners, it was a good opportunity to catch up with others and have a socially-distanced conversation whilst enjoying being able to race again.

Image courtesy of How Hard Can It Be Events & CODRC