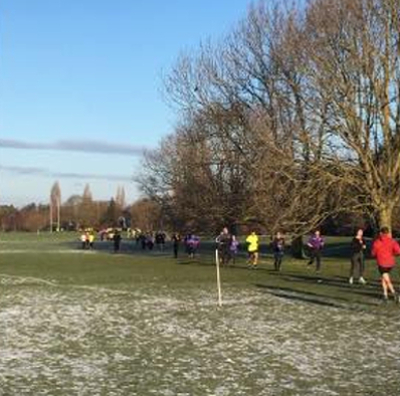 A record attendance and cakes galore left a sweet taste in the mouth at Saturday’s (2 February) Gloucester North parkrun where the icy conditions didn’t prevent 218 people from enjoying a piece (or two) of the action.

Gloucester North parkrun was one of a few events that went ahead in spite of the Arctic weather that caused numerous parkrun cancellations. The core team carried out a final inspection on Saturday morning and even though the ground was hard and there were patches of snow in places it was deemed to be runnable. They advised people to wear trail shoes and take care as they completed three laps around Plock Court Playing Fields, Gloucester Academy/Bishops College School.

Cake is always popular at parkrun and none more so at Gloucester North whose selection would have impressed the judges on the Great British Bake Off. The mouth-watering line up included their famous flapjack and all were on sale as a fundraiser to send Noah Perkins, a regular volunteer and third world country scout to the 2019 World Scout Jamboree.

Blue skies and sunshine greeted the 218 participants including 57 first timers to the course, some of whom had travelled from Bristol, Northampton and Manchester. For seven people it was their first ever parkrun and hopefully, the start of many.

James Denne of Gloucester AC was the first man home in 17:26; teammate Gemma Collier was the first woman in 20:36. There were three pacers whose efforts helped 29 people to a PB.

Finally, a special mention of the 28 volunteers whose hard work and enthusiasm on a bitterly cold morning ensured this event took place and to great success.