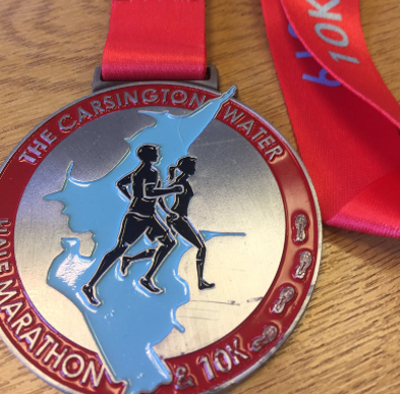 Half marathon course records went tumbling down at last weekend’s (23-24 February) Carsington Water Half Marathon & 10K. Impressive results were posted on both days by the men’s and women’s winners.

The tranquil setting of Carsington Water was an ideal venue for this two day affair from Nice Work. Entries had filled up quickly for the Half Marathon/10K double header on Saturday and Sunday and there was a very long waiting list – proof of the popularity of the event. The two races were used by many as part of their preparations for a spring marathon.

Over 1,000 took part over the weekend, enjoying superb views of the Peak District as they followed undulating trails around the reservoir. There was plenty of support along the way with an additional boost from two youngsters and their ‘Power Up’ sign that everyone was invited to touch as they went past.

In Saturday’s Half Marathon, Jarrod Gritt of Royton RR was first across the line in 1:16:23; Margaret Beever of Stainland Lions RC was the fastest female in 1:26:33.

On Sunday, Daniel Robinson won the Half Marathon in 1:16:18. Holly Rush of Avon Valley Runners was the winning lady in 1:25:32.

Big Bobble Hats sponsored the prizes and there was a Carsington Water themed medal for every finisher.

Entries have opened for the 2020 Carsington Water Half Marathon & 10K. Visit the Nice Work website for more details.