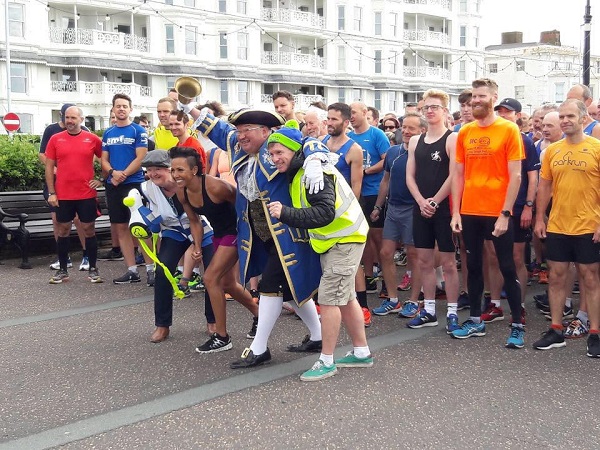 If you went down to the park on Saturday (16 June) you were in for a big surprise as there were record attendances at Worthing (667) and Horsham (655) parkruns. Both venues were celebrating milestones and with 1,322 participating and 74 volunteers supporting their efforts, Sussex was a beacon of success for parkrun.

The venues are around 21 miles apart on the A24 – less than seven parkruns or half an hour by car. Horsham is the senior event and was celebrating its 200th run in Horsham Park, while Worthing clocked up 100 runs from Splashpoint Leisure Centre on the promenade.

Let's take a closer look at the two events starting with Horsham parkrun, launched on 6 September 2014 with 366 completing three laps of Horsham Park. Features include the lakeside start and finish, a few undulations and the Human Nature Garden. First finishers at the inaugural event were Neil Boniface (Crawley, 15:49) and Horsham Blue Star Harrier's Amicia Lee (22:45).

The current best time at Horsham is held by the first man to cross the line on launch day, Neil Boniface, with 15:05 in May 2015. The women's course record has stood for 198 runs at 17:52 by Rebecca Moore (Worthing Harriers) at the second event. The age-graded best belongs to 2017 W50 Virgin Money London Marathon winner, Elspeth Turner (Horsham), with 93.13% for her 18:27 in May last year.

So has the fast course produced superior records? The answer is affirmative as the best times at Worthing are 14:51 by James Westlake (Crawley) and 16:59 by Worthing record holder, Rebecca Moore. The battle for age-graded approbation could not be much closer as Masters international W70 Pauline Rich (Worthing Run Academy) tops that category, with 92.87% for 24:47 exactly one year ago.

Worthing's centennial was attended by Dame Kelly Holmes (see photo) and they ran out of tags at 500 so had to manually process the remaining 167 finishers! Meanwhile, the star at Horsham was a magnificent cake (see photo) although we have no idea how it fed the 700!

So there you have it. This being parkrun you don't pay your money but you can make your choice of two vibrant events on your doorstep if you live in West Sussex. Why not try them both like so many already have? 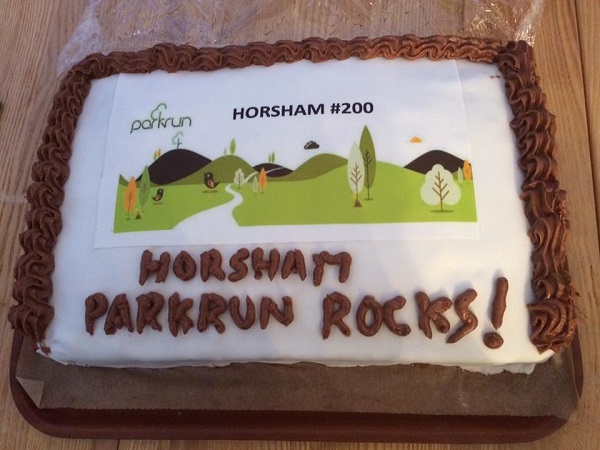