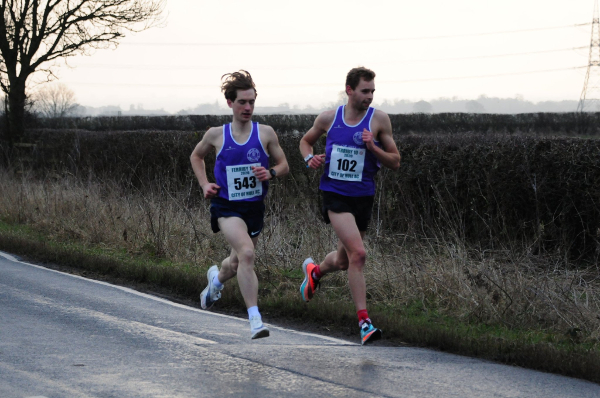 Putting their foot down at Ferriby 10

Speed is what you need as demonstrated by Kris Lecher and Matthew Nelson, both of whom were flying along in unison at Sunday’s (26 January) Ferriby 10. They and many others went full on at this popular Yorkshire road race.

The Ferriby 10 2020 was a well-organised event from City of Hull AC. It is a race with a long and proud history – the first Ferriby 10 was launched on the 16 January 1954 – and has been subject to the extremes of the British weather with gales, sleet and snow. There was reasonable weather this time considering the time of year.

Brendan Foster won this race in 1980: the race director allowed him to run following the cancellation of an event Foster had entered due to the weather. He won it in 48:01 only to go and run the course again as he had a 20 mile training session planned.

This year the field set off at 9am towards Skidby Mill then left through Skidby and over to Little Weighton. Another left into Rippligham, down towards Raywell before turning left again at Waudby Green. A steep hill waited for them on the road to the finish.

There was synchronised running from Kris Lecher and Matthew Nelson at a mile and a half before Lecher pulled away to lead the race. Lecher of City of Hull AC was the winner in 50:42 and his teammate Matthew Nelson finished second in 52:41. Ben Sadowyj of Barton & District AC was third in 54:57.

A strong run by Georgina Weston of Rotherham Harriers saw her win the women's race in 1:02:00. Tegan Roberts of City of Hull AC was second in 1:02:14 and Sophie Darling of Lincoln Wellington AC third in 1:03:44.