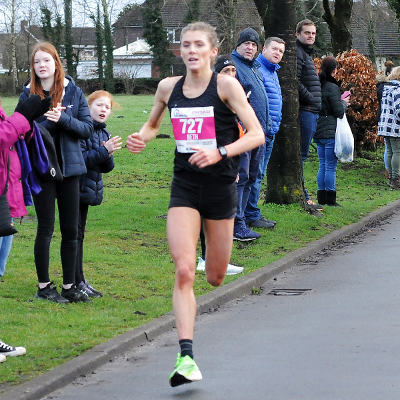 The fast Alsager 5 (Sunday 2 February) suited Beth Potter who threw down a marker for the rest of the season. as her international experience proved invaluable, resulting in both a win and new women’s course record.

Beth Potter represented Scotland at the 2014 Commonwealth Games in Glasgow and was part of team GB at the 2016 Rio Olympics, competing in the 10,000 metres. In 2017 she switched to triathlon and in 2019 she won gold at the European Triathlon Championships.

On Sunday, the versatile Scot lined up alongside several top runners in a packed field of nearly 1,000 participants with more than a few having their sights on a PB. At the front was the winner of the senior men’s race at last weekend’s Midlands Cross Country Championships – Omar Ahmed who also won the Speedway 10K on 19 January. He was looking to add the Velorunner-Envisage Alsager 5 road race to his growing tally of wins.

Conditions were near perfect as everyone headed off at 11am from Pikemere Road along a flat course around Alsager that finished at the rear of the Leisure Centre. Potter of Victoria Park City of Glasgow AC ran impressively to win the women’s race in 25:34 over a minute ahead of Eleanor Davis of Preston Harriers, second in 26:44 and Kate Holt of City of Stoke AC, third in 26:55.

Omar Ahmed of Birchfield Harriers sped away from the start and rocketed his way around to become the overall winner in 23:25. Emile Cairess of Leeds City AC was second in 23:46 and Johnny Mellor of Liverpool Harriers third in 23:55.

Another lady in fine form was Dot Fellows of Cannock & Stafford AC who set a new F75 British record of 39:01.