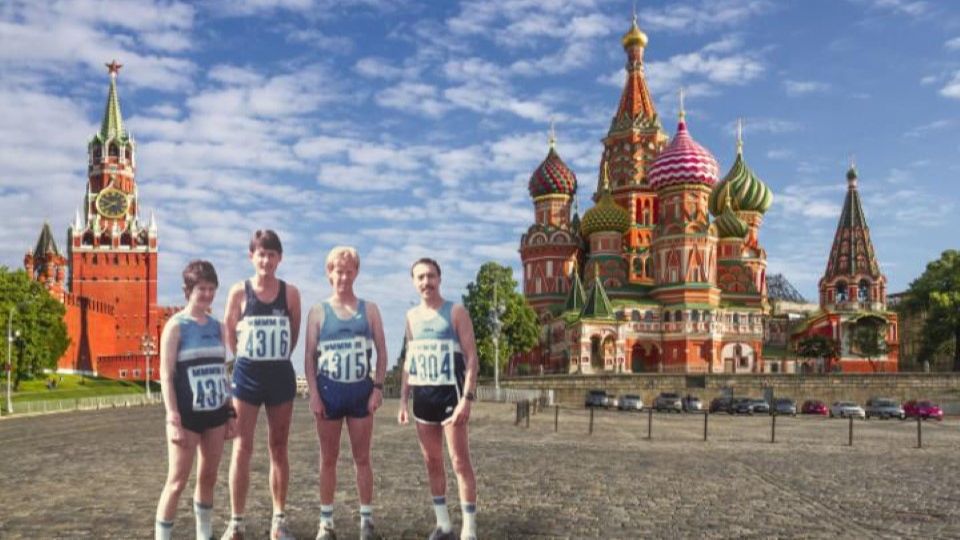 Poole Runners - then and now

This lovely photo popped up on the runABC South news reporter's desktop via Old Running Results and Pictures facebook by Keith Long. It depicts four team members from Poole Runners competing with their oversized numbers in the 1986 Moscow International Peace Marathon - the year of the shocking Chernobyl disaster.

With football being in the news this week we recall that back in 1986 Liverpool FC won the League and FA Cup double; Alex Ferguson was appointed Manager of Manchester United and a fresh-faced Gary Lineker won the Golden Boot at the World Cup in Mexico before signing for Barcelona for the (then) hefty sum of £2.8million!

But back to the Moscow International Peace Marathon and our intrepid travellers from Poole Runners. The race was held every autumn for 30 years before being rebranded as Moscow Marathon in 2013.

The course was mostly flat and the broad avenues through the capital were closed to all traffic. Sights included the Kremlin, Red Square, St Basil's Cathedral (dating from 1561), Gorky Park, and Bolshoi Theatre. Much of the route ran alongside the Moskva River.

It must have been quite an experience for the Poole Runners quartet 35 years ago. The club has since gone from strength to strength, with sections catering for road racing, cross country, and track and field competition.

Poole Runners celebrated their 40th anniversary this month and popular races they promote include the Junction Broadstone Quarter Marathon (since 1985) with their ever-present competitor being the durable Geoffrey Scott (M75) who ran 53:58 for 331st overall in 2020 - and is pictured above (#4316).

Unfortunately, the 2021 Quarter Marathon - which is traditionally held on New Year's Day - was cancelled due to the coronavirus pandemic but Poole Runners are active again with their Upton Summer Series - six races of approximately 5.5km within beautiful Upton Country Park.

Despite the counter-attraction of a certain football match at Wembley Stadium the latest Upton Summer Series event - on Wednesday 7 July at 7pm - drew 148 runners and was won by Matthew Brown, of Littledown Harriers, in 18:58. Charlotte Bunch, representing the hosts Poole Runners, took the women's award in 22:23.