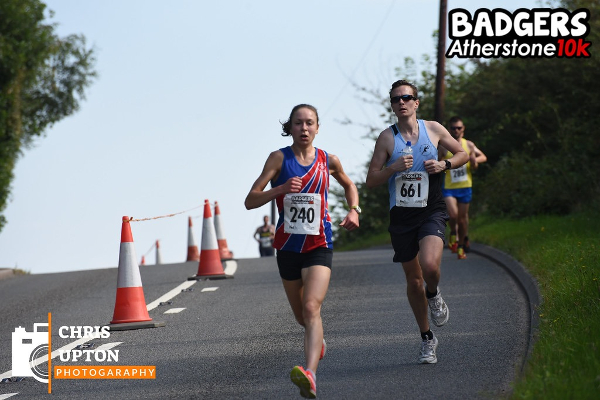 Keen to win at a sizzling BADGERS Atherstone 10K

The heat was on for Polly Keen as she held off a challenge to win at Sunday’s (25 August) BA10K. She was amongst 620 runners including club mascot Badger Bill who battled in sweltering conditions.

The 6th BADGERS Atherstone 10K (BA10K) was held on the hottest August Bank Holiday weekend on record – a contrast to last year’s event with rain and cooler temperatures. Sun cream and an extra water station were the order of the day – the latter added at 8km by organisers BADGERS RC.

Badger Bill joined runners in Long Lane as they waited to start at 10am. They streamed away towards an undulating course around this market town in North Warwickshire that included private access through the Merevale Estate. Waiting for them was ‘The Hill’ a.k.a. Merevale Lane.

Polly Keen of Nuneaton Harriers followed her wins at the Arden 9 and Potters Half Marathon with victory in the women’s race, crossing the line in 39:05. Annie Byrne finished 13 seconds behind her in 39:18 with Rosanna Andrews of Rugby & Northampton AC third in 41:20.

Liam Bradbury of South Derbyshire RR was the overall winner in 36:14 followed by Jay Fallaize of Higham Harriers in 36:22. Danny Warren of BADGERS RC was third in 36:44.

Taking part was Juan Manuel Vera Bacallado or ‘El Guapo’: he ran from his home in Tamworth along the canal to Atherstone, completed the 10K and then ran back home giving him a total of 24.72 miles. He finished in 1:11:12.

Badger Bill (Emma Masser) was one of several people who went to the aid of a female runner who had collapsed with heat exhaustion. The runner is recovering at home and grateful for the help and support shown with a ‘thank you’ to BADGERS RC.