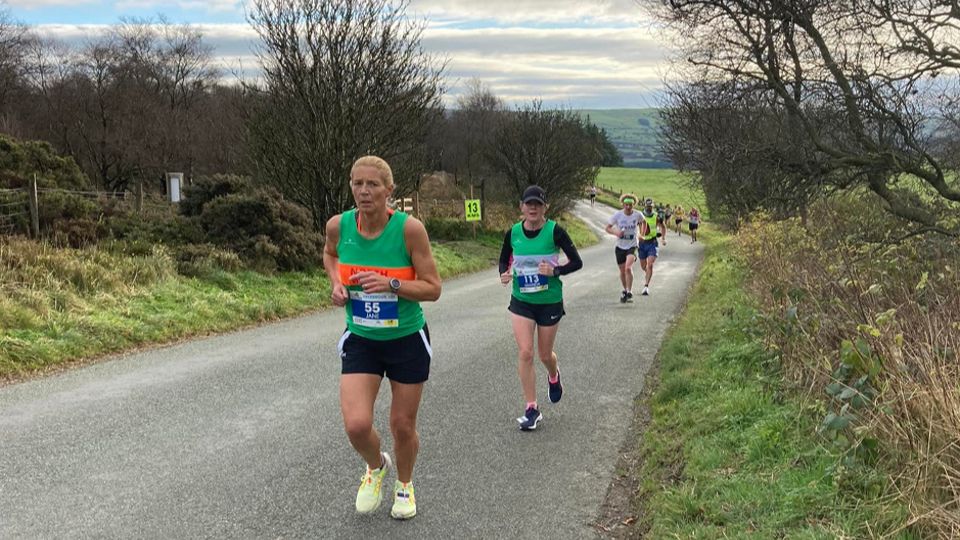 Mighty performances at the 2021 Meerbrook 15K

This race rounded off a strange and successful year for NSRRA.

What went up came down and up again for runners at Saturday’s (20 November) Meerbrook 15K in this final race of the 2021 NSRRA programme. Tough but with fantastic views across the Staffordshire Moorlands and Cheshire Plain.

For many people it was a case of saving the best 'til last with the Meerbrook 15K which has become a regular fixture due to the hilly route and not least – Gun Hill. This is where you ‘dig in and hold on’ on the way to the summit where you catch your breath whilst appreciating the scenery before continuing along this undulating course. There is some respite however; a fast blast in the last 2K, all the way downhill to the finish outside the village hall.

Saturday’s race included a good mix of runners from local clubs keen to bag those all-important NSRRA points and for some, to become a Compleat Runner. Amongst the field were teams of 6 gents and ladies from Cheshire, Derbyshire, North Wales, Shropshire and Staffordshire in the inter area match, incorporated within the Meerbrook 15K. For some team members it was their first time at this race whereas others were looking to record a personal best and all gave 100% effort on the day.

Sophie Birtles of Shropshire Shufflers was the women’s winner in 57:03 followed by Sara Willhoit of Shrewsbury AC in 58:11. Willhoit’s team mate Lauren Cooper was third in 59:58.

A full set of results is available via the runABC Midlands Race Listings page.

Staffordshire men and women had a good day at the office with a clutch of PB’s, finishing in the bronze medal position, much to the pride of team manager Paul Swan and High Performance Runner Coach John Danahay.

The Meerbrook 15K brought the NSRRA league to a close that has in the words of Chairman Ken Rushton: “Been a funny old year with the first 8 races being virtual then the first live race (Cheadle 4) in July: before being able to carry on with live races through to the end of the season. It all starts again next year on 6 February with the Alsager 5.”

Renew your membership or join for the first time at the NSRRA website.

Ken thanked everyone for their support during these unpredictable times and issued a big ‘Well done’ to the Compleat Runners.

In return, the running community would like to thank Ken Rushton and team for their hard work and support and here’s to the 2022 season!