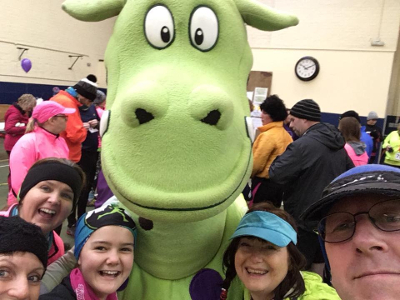 Cold hands, warm hearts as runners and walkers stepped out at a snowy Ellesmere for the Asthma UK 10K Fundrun (Sunday 21 January) where the ‘Marvellous Marathon Dragon’ made a welcome guest appearance.

Around 200 participants braved the weather to follow a one lap route in a clockwise direction along the canal towpath between Ellesmere and Colemere. They were encouraged along the way by enthusiastic volunteers and received a special Asthma UK 10K medal at the finish and the chance to replace the calories with plenty of tea and cake.

This fundraising event was organised by Jude and Les Moulsdale of Mere Runners who are currently training for the 2018 London Marathon. They are running to raise awareness and funds for Asthma UK and to inspire others as this sport has been life-changing for both of them. Les Moulsdale was diagnosed with asthma in his childhood and thanks to medication, was able to pursue a range of activities and lead a normal life. They held the first Couch to 5K programme in Ellesmere that has since grown in popularity and take part in 10K races on a regular basis.

Sunday’s run was on behalf of Cameron’s Fund at Asthma UK; set up by Gemma and Ashley Brown whose son Cameron tragically died from a severe asthma attack at the age of two. Gemma will be running this year’s London Marathon as part of a team of five which includes Shropshire’s Puff the Asthma Dragon a.k.a. Dana Power.

The Asthma UK mascot helped with fundraising and medals as well as being more than happy to pose for selfies with runners and walkers. He and many others gave willingly of their time on a successful day for everyone concerned.